Women who do casual sex are, on average, more distressed than other women.

Men who do casual sex are, on average, more confident than other men.

That’s what sociologists, Mark Regnerus and Jeremy Uecker, found as they researched their book, Premarital Sex in America.

That means the double standard is neither good nor bad. It just is. They say.

The professors point out that our sexually liberated age has not freed women from experiencing depression when they do random sex. So women must be naturally more monogamous, they assume. And besides, evolutionary psychology says so.

Yet, in some cultures women have – or have had – casual sex, and seem to be just fine. Like American Indians and Pacific Islanders around the time Europeans arrived.

And even right here in America today, some women do enjoy it.

But the truth is, modern American women are not really liberated. Just listen to popular music and you will learn that while sexually active men gain status, women who behave the same way are still called “hoes.” 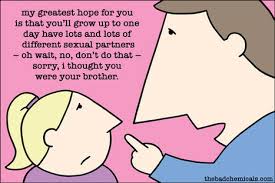 Or, we regularly see Viagra ads on TV, but no networks will air ads for women’s sex aids on daytime or primetime television. Vibrators are still illegal in some places.

Parents — especially dads — are more open about sexuality with their sons than their daughters.

And guys get high-fived by friends and acquaintances as their “number” goes up.

Meanwhile, there is still plenty of slut-shaming in our culture. One of my students was on suicide watch for months after undergoing this sort of name-calling. Another young woman who once lived a few miles away from me killed herself.

Women today are sexually liberated? With so much punishment it is no wonder that sexually active young women get more depressed.

Of course, some may be more liberated than others. After all, “who we are” is influenced by a mix of our biological personalities, the people we interact with, and our culture. So if a young woman grows up in a more sex-positive subculture, and has friends and relatives who are more sex-positive, she may be, too.

But looking at our society as a whole, nearly half of women have experienced at least one of the following indicators of sexual dysfunction: low or no interest in sex, painful sex, difficulty or inability to reach orgasm.

That is not natural. That reflects a culture that punishes girls and women for being sexual.

You also have to wonder about the direction of causality when it comes to sexually active women and depression. Some of my students have talked about using sex as a way to feel good about themselves, maybe to feel attractive or loved. So these young women may start out more depressed and hope that sexual activity will make them feel better. But it’s not solving the root problem.

Plus, one study found that when virginity was lost, men’s self-esteem went up, but women’s often went down. That was largely because girls became body-conscious in bed, and ended up feeling that they weren’t attractive enough. Since guys aren’t expected to have “perfect bodies” in bed they avoid that problem.

The thing is, the double standard is harmful because it creates a vicious cycle: Women’s sexuality is punished. That lowers their interest. But then their lower interest is used to justify placing the burden of controlling men’s sexuality on women, and punishing them if they don’t adequately control it. Which represses women’s sexuality even more.