Hooking Up Deprives Women of Marriage?

Women should stop hooking up because it stalls men’s maturity and keeps them from getting married. A lot of young women will never marry because men can get sex without commitment.

That’s what what a young man told me a few weeks ago.

If he’s so worried, why not tell MEN to stop hooking up because their behavior stalls their maturity and the stability of family life in America? Leaving men deprived of marriage, too.

Why doesn’t he want women hooking up?

The fact that he only calls on women to limit themselves reminds me of other calls for women to practice self-restraint:

Gee, I see a pattern here. 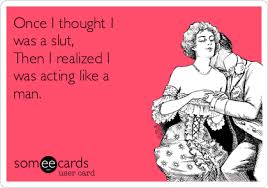 Telling women, but not men, to restrict themselves from casual sex says something about who is free and who is not. Men may have as much sex as they like, but women had better watch themselves!

Lest they wind up lonely old maids.

But he needn’t worry his pretty little head anyway, since:

And if you don’t want to marry, it’s only a big deal if there’s a big gap between women and men, and I don’t see that.