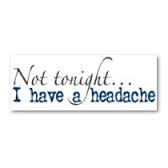 Research consistently shows that women have a lower sex drive than men.

But maybe it’s not a problem?

While 44% of US women report sexual problems, most commonly low desire, only 12% are bothered by it.

If you don’t care, what’s the problem?

You could say that something affecting 40% is almost normative.

What I see on a near daily basis are women of all ages who feel that because their sex drive is less than their partners’, they are inadequate and in the wrong. But what does “normal” mean? Is it a perception of how one ranks compared to others? Is there some objective measure?

Some women wonder why they are considered the problem instead of their (sex-obsessed?) husbands.

Is pop culture stirring anxiety by creating the notion that everyone else is having great sex? Dr. Ingrid Nygaard wonders.

And sex educator, Dr. Emily Nagoski, points out that for women with low desire,

Feeling judged or broken for their sexuality is exactly what they don’t need — and what will make their desire for sex genuinely shut down.

What to do? She adds:

But just because low desire and difficulty enjoying pleasure is “normal” in its commonness, that does not mean that it’s okay.

Still, the women aren’t “wrong.” A sexually repressive culture is. That’s what needs to be fixed.

Why have less sexual enjoyment and satisfaction than you need to?