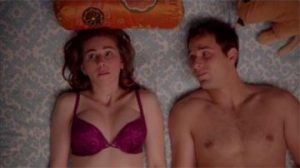 The first time you see Lena Dunham’s character having sex in the new HBO series “Girls,” her back is to her boyfriend, who seems to regard her as an inconveniently loquacious halfway point between partner and prop, and her concern is whether she’s correctly following instructions.

“So I can just stay like this for a little while?” she asks. “Do you need me to move more?”

Those are the opening lines from New York Times columnist, Frank Bruni, writing about the HBO series “Girls” which premiered April 15. I wrote a bit about the interview last week asking, “Is male or female sexuality better?” But Lena and Frank have more to say, and so do I.

Bruni says their sex play seems to be all about what “he” wants “her” to do. Dunham’s real life informs the show, and Dunham suggests that what the proverbial “he” wants is often NOT what “she” wants. Amidst aggressive posturing and “a lot of errant hair pulling” she has thought, “There’s no way any teenage girl taught you and reinforced that behavior.”

The scene, and Dunham’ comments, suggest a depersonalized sexuality with women as objects, sex as sometimes harsh gymnastics and, too often, all about “his” pleasure.

Some women get into pornified sex, too, but usually not all the time, or not on the first few dates. And most seem to want something more, even if porn-sex is a part of the experience.

Lights glaring, gaping at her body parts, manipulating her into positions popular in pornography so he could admire her. He was aggressive, he was confident, he was following a formula. He was cold.

As Valerie saw it, “He thought it was hot, that he was a stud. I felt cheapened. I felt so empty after the experience.”

Dunham can relate, saying that, “People can be so available in a superficial sense that they’re inaccessible in a deeper one.”

And maybe when there’s a larger context of relationship, and not just empty sex.