← Child Rape: Not As Bad As Contraception
Ex-Hooker’s Letter to her Younger Self → 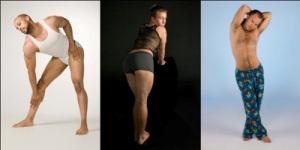 Women typically have lower sexual desire and drive than men in our society, according to both sex surveys and statistics on sexual dysfunction. Our culture may be partly to blame. Consider this:

We are bombarded with “sexy women” but not “sexy men”

Whether on billboards, TV ads, Dancing With The Stars, Olympic ice skating, or professional football, women are half-dressed and men are fully-clothed. The camera hones in on women’s breasts and butts and ignores men. Sure, we are seeing more hot men these days thanks to Matthew McConaughey and Ryan Gosling. But the last time I checked out People’s sexiest men I saw lots of faces and loose T-shirts and few bods. Even the clothing that women and men walk around in show off women’s bodies and, more often, hide men’s.

As Amanda Marcotte at RH Reality Check points out,

Straight women don’t get nearly the provocation on a daily basis — is it any wonder that 60% of the men who answered the Consumer Reports survey (on sex) thought about sex once a day, but only 19% of women?

No part of the male is fetished

No part of the male body is fetishized, either. Men stare at breasts and butts, but what are we supposed to look at? These fetishes may seem natural for men but they are actually a cultural construction. How are they created? In part, see the section above. Or see my piece called, “Men Aren’t Hard Wired To Find Breasts Attractive.” Ever wonder why tribal men don’t get all excited about tribal women’s breasts and butts?

Women are not taught to consume the male body with their eyes, as men consume theirs. To make matters worse, pics of sexy men can seem “gay.” Since sexiness is almost always meant for the male gaze, on an unconscious level women can come to see “sexy” men – perhaps posed in Speedos — through male eyes, too. Bummer!

The double standard is loosening up but sexual women may still be called: slut, whore, ho’, tramp, skank, nympho, hussy, tart, loose, trollop… the list goes on. Men possess cocky cocks while women’s privates are just “down there.” College men returning home Sunday morning may take the Walk of Fame while the women they’ve just had sex with take the Walk of Shame. And so women’s sexuality becomes more repressed.

The problem of housework

Sometimes the problem is more mundane. Women do about twice as much housework as men. After a full day at work women are more likely than men to cook dinner, clean up, and get kids ready for bed. Then they’re too tired for sex and resent their husbands. Not a way to get in the mood.

Or, maybe mom works in the home where her “invisible” work gets noticed only when it’s undone. A lack of appreciation won’t get anyone in the mood for love making.

Sexual violence also takes a toll. Rape is most prevalent when women are devalued. And women who are raped often lose interest in sex. One woman I know of went numb and emotionally left her body when she had sex because a past rape had made sex seem terrifying and repugnant to her. “Desperate Housewife,” Teri Hatcher, was molested by an uncle who told her that one day she would like sex. That only made her close up more because she didn’t want to prove her disgusting uncle right.

But all women also face the prospect of getting screwed, rammed, nailed, cut, boned, banged, smacked, beaten, and f’d — in common street parlance — when they get intimate. Who wants that?

How to raise a woman’s desire

If you want women to desire sex then: help with housework, show appreciation, stop shaming women for being sexual, or for not fitting ridiculous “ideals,” desire her and let your lady know she’s beautiful.

← Child Rape: Not As Bad As Contraception
Ex-Hooker’s Letter to her Younger Self →