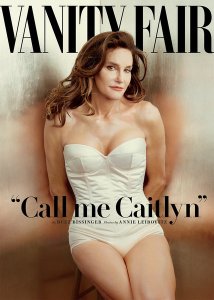 We rejoice at Caitlyn Jenner’s courage and happiness as she transitions, bodily, to womanhood.

But as she “came out” so did some disturbing truths about how we value women, says Rhonda Garelick in a New York Times piece. In a Vanity Fair spread,

Ms. Jenner poses in skintight dresses, a cinched black lace corset and two different gold evening gowns … She lounges on a sofa, peers into mirrors or reclines with her head thrown back, eyes closed… (appearing) languid and glamorous, her body still and on display rather than performing any activity…

This seems less the liberation of a true self than a reminder of the straitjacket requirements of acceptable, desirable womanhood.

Prof. Garelick makes a good point. Why are women so often defined in a one-dimensional way?

Here are some of the most popular responses to that post:

There is an old Bee Gees song called “More Than a Woman.” What does it mean when a man tells his partner that, “You’re more than a woman to me.”

You are more than just sex to me?

“Woman” is synonymous with “sex”?

We should all be embraced in our complexity

More Than A Woman

As Ms. Jenner embraces her newfound sexy womanhood, some of the rest of us would like to be freed from being only that. Like this woman, “hshrncjd” who responded to a man who wished to be objectified:

I think if men were objectified in the way women are, as in our only worth being sex, you’d think differently. Objectification leaves me feeling shit about myself constantly, and I don’t enjoy sex like I should.

Men are seen as full humans who are desired in a complex way, how they act, how they dress, being funny and sweet etc. I read that women tend to fantasise about men they know whereas men fantasise about an unknown woman.

I’d rather be desired for all of me than think all my worth is in my tits and the rest of me doesn’t matter. Like it’s just body parts.

Humans should be embraced in their complexity.

Maybe Caitlyn is not so one-dimensional as the photos make it seem. Maybe she is interested in engaging in the world and being more than a pretty face. But the images don’t communicate that.

I appreciate the observation that Prof. Garelick ends her essay with:

While the fanfare around the emergence of Caitlyn may advance our acceptance of transgender individuals, it does so, in this case, at a price: the perpetuation, even celebration, of narrow and dehumanizing strictures of womanhood sustained by the fashion and entertainment industries.

True liberation of gender’s vast spectrum should ask more of us than that we simply exchange one uncomfortable, oppressive identity for another.