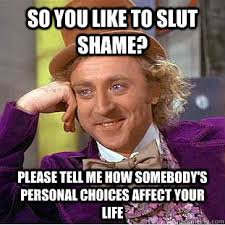 Plenty of women hate the double standard that rewards men for having sex, but punishes women.

But on average, men dislike it more.

You might think that men enjoy feeling superior and privileged because they can have sex, unpunished, in most circumstances while women often cannot — at least not without risking punishment.

On the other hand, without the double standard men would get more sex.

Why are women more likely to support the double standard?

Even though a lot of women dislike a rule that says it’s more okay for men to have sex women are more likely to support it. Why?

I don’t know for sure. But I suspect it’s due to a vicious cycle that’s created partly by the double standard, itself.

When you live in a world where women are punished if they don’t suppress their sexuality much of the time, after a while desire diminishes or goes away. I have talked about how this process happens here, here and here. As a result, in the United States nearly half of women experience sexual dysfunction — painful sex, difficulty with orgasm, or little to no desire. That’s not natural. That’s a symptom of sexual repression.

Now why would you be all excited to make it easier to get something that you don’t have a lot of interest in, and which may seem dull at best and painful at worst?

For these women, getting rid of the double standard might only bring pressure to have something you don’t especially want.

The double standard can be used as a weapon

Some women also use slut-shaming as a weapon.

Some suggest that it is used by women who don’t want to be pressured into having random sex. Or by women who fear that casual sex will keep men from marrying — “Why buy the cow when you can get the milk for free?”

But I suspect that that isn’t the real, or at least primary, reason. In fact, slut-shaming is less tied to sexual behavior than by a woman’s looks.

The more attractive a woman is, the more likely she is to be slut-shamed. Sex often — maybe usually — has nothing to do with it.

And that may be partly due to how finding a partner works. Typically, women don’t pursue men. They wait to be pursued. So how do you attract attention to yourself? You look as attractive as possible. And get really annoyed at women who draw more attention. Better put them in their place!

Maybe more important is the fact that in our culture a woman’s worth is based primarily on how attractive she is. So if a really beautiful, sexy woman walks into a room, other women can feel like they have been somehow down-sized. Some women will shame sexy-lady to put her “in her place” — somewhere beneath themselves.

You hurt yourself by hurting other women

And then the cycle continues. The name-calling paints sexuality with fear and punishment, which ends up hurting young women in middle school, high school, and beyond. And later, their own daughters.

The cycle needs to stop.

Posted on October 17, 2016, in psychology, sex and sexuality and tagged psychology, sex, sexuality, slut shaming, why do women slut-shame. Bookmark the permalink. 34 Comments.