← Back When Abortion Was Illegal
Satisfying Long-Term Relationships → 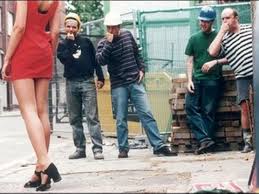 Women don’t catcall men. Well, rarely if ever. Now, why is that?

Maybe because no one really catcalls for the reason that would seem most obvious: to express appreciation for beauty or sexiness.

Turns out, guys are often just performing for other guys.

In fact, in some ways “she” barely matters. As one guy explained,

I don’t know if (women) enjoy it or not; that’s not the purpose of us popping our heads out.

Which explains why these guys don’t care that there is pretty much no chance of getting a positive response from the women.

“Girl-watching” is more about getting manhood confirmed by other guys, says sociologist, Beth Quinn, who interviewed 43 men and women at a workplace and a local college.

Catcalling is a game through which manhood and male superiority is expressed and affirmed as the woman becomes a thing, an object… a sex object — vis-à-vis his personhood.

It’s a game that men teach each other. One born-again Christian was disturbed when a male co-worker brought his young son to the job site and showed him how to catcall both women and effeminate men. (See, it’s not about appreciating a lovely girl. It’s about asserting your “superiority” as a man over women and gay men.) 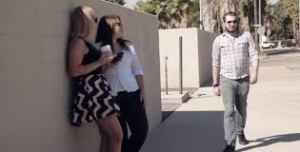 The woman might be a peer — or even a boss — but morphed into sex object, her competence, power and humanity dissolves.

And as guys girl-watch men turn into judges — placing themselves above the “thing” being evaluated.

But guys must avoid “undressing women with their eyes,” which suggests that the woman has power over the man. You’ve got to keep it light.

It’s not that men have worse character than women. Many — probably most — men don’t behave this way. Catcalling arises from constant pressure to prove manhood — to prove that the high status society has bestowed (by ranking men and masculinity above women and femininity) is deserved.

← Back When Abortion Was Illegal
Satisfying Long-Term Relationships →