← Sex Is Best When She Likes It
Fave Feminist Celebs →

Be… But Don’t Be… Pretty, Girly, Sexy

I’d learned that girls should be pretty. And I tried to be. But there was a downside.

Like one of my classmate’s moms called me and my friends “the lipstick girls.” I was conflicted. It was good to be pretty and girly, right? But the label didn’t feel so good.

Or, a friend of mine told me I wouldn’t grow up and get a job because I wasn’t serious. For some reason kids at my school seemed to think I was stupid because I was “girly.”

But while I wore Abercrombie and cared about fashion, so did half of the other girls at school.

I think I got so much criticism because I had C cups by 6th grade — which got me the attention of boys and scrutiny from girls. And even from women: One of my mom’s “friends” said I would end up a slut, with my “big boobs.”

At age 13 I didn’t understand why all of this was happening.

But then I met girls who had low self-esteem because they weren’t girly enough. Apparently, they were too tomboyish. And they thought boys didn’t like them because they weren’t “developed” enough. So that was confusing for me since I’d been put down so much for traits they wanted. So I saw how hard it was for them, too.

We were all caught in a double-bind: a no-win situation where we shouldn’t be girly or tomboyish.

By high school I ran smack into the sexual double-bind. 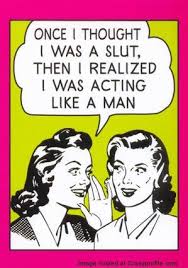 The sexual double standard: okay for him but not for her

My friends were more sexually experienced than I was and I didn’t want to seem prude — and I wanted approval. So when I went to Israel for five months after high school I experimented sexually. But I was called a slut for doing it.

So I got punished for something I thought I was supposed to do. And I didn’t even enjoy it. It didn’t bring me any satisfaction or happiness.

But I never got mad about being called a slut — even while guys were praised for doing the same thing —because I hadn’t really thought through the double standard. Instead, I just accepted that that’s how things were.

As I think over my experience I’m realizing why I never enjoyed sex. I actually became less interested when it became real. And that’s because of the punishment I’d begun to associate with it.

I used to think that if I was sexual it was my fault. And if I wasn’t sexual enough, it was my fault. I’m finally seeing that our society has impossible standards that leave women in a no-win situation. And I’m seeing that the guilt I’ve felt is due to society and is not natural or necessary.

I’m finally taking the blame off of myself and seeing the bigger picture.

This was written by one of my students who asked that I use a pen name.

← Sex Is Best When She Likes It
Fave Feminist Celebs →