My Boyfriend, the Objectifier

When I first heard feminists complain about sexual objectification I didn’t get it. Why didn’t they want women to be sexy?

Turns out, I didn’t understand what objectification was.

Put simply, it is about seeing someone as nothing but an object – one that is sexual in nature – that exists for someone else’s pleasure. Objects don’t have feelings, thoughts or life goals, so you needn’t worry about hurting them.

So I finally got it intellectually. But I didn’t fully get how it played out until I met “Mike” (that’s what I’ll call him). And years later saw Mike’s way of seeing in a Ms. Magazine article discussing objectifying ads.

My first hints that Mike strongly objectified women were 1) staring at boobs, 2) being rude to me by staring at boobs and 3) when I told him that staring at boobs was impolite he said, “Well, they’re just more attractive than you.” Apparently, I was an inadequate sex object who had no feelings to worry about.

That’s when we broke up.

But when I asked what he meant, he explained that they were more “open” and “invited men in” by opening their clothes. Compare that to this Ms. article:

Does the image suggest that sexual availability is the defining characteristic of the person?

This American Apparel ad, with the copy “now open,” sends the message that this woman is open for sex. She presumably can be had by anyone. 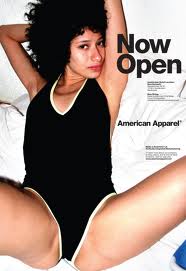 And, what he found attractive was all about one body part: boobs — the bigger the better. Nothing else mattered. (No idea why he was with me.) Turning again to Ms.:

Does the image show only part(s) of a sexualized person’s body?

Headless women, for example, make it easy to see them as only a body by erasing the individuality communicated through faces, eyes and eye contact:

I learned that Mike was a breast man who didn’t even notices faces. The article continues:

Covering up a woman’s face works well, too:

Does the image show sexualized persons as interchangeable?

Interchangeability is a common advertising theme that reinforces the idea that women, like objects, are fungible. And like objects, “more is better,” a market sentiment that erases the worth of individual women:

This image of a set of Victoria’s Secret models has a similar effect. Their hair and skin color varies slightly, but they are also presented as all of a kind:

Yeah, that was one weird short-lived “relationship” — and I use the term loosely. But without Mike, I never would have truly understood what feminists were talking about. Because for some reason, I rarely attract, or am attracted to, objectifying guys. (If they objectified, they were subtle.)

So in a weird way I have to thank Mike, if you’re still out there.

To see the original Ms. article that this post is based on, go here.