← Men: More Homophobic Than Women?
What Abusers and “Pro-Family” Conservatives Have in Common →

The Constricting Bodice: Empowerment and Imprisonment? 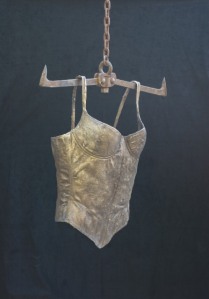 “The bodice, the corset and the bra can be instruments of empowerment, or torture.”

In her series “Overt Underthings” artist, Angela Fortain, considers a paradox: Distorting the body can both liberate and imprison, she says. Society dictates constraining fashions which, once dawned, create power over others.

The power to shape space as others turn in our direction.

Lower status bowing to higher. Standing based on beauty – and what to make of that?

The power to gain love? Or sex? And must one undergo body-torture to attain either?

How might power become less available inside the constrained body?

Are the powers bestowed – or removed – substantive or superficial?

Finally, Fortain muses, “Separating the sensual object that once transformed the wearer into an object of sexuality allows us to examine the object, and our own desire.”

The power of objects… our own desire?

Fortain’s work provokes more questions than answers. As art should.

This piece was originally shown at “CONTROL,” an exhibition of California women artists presented by The Women’s Caucus for Art at New York’s Ceres Gallery, February 1 – February 26th, 2011.

For more on Angela Fortain’s work go to ARTslant.

← Men: More Homophobic Than Women?
What Abusers and “Pro-Family” Conservatives Have in Common →