Commenting on the pieces shown here, she reflects, 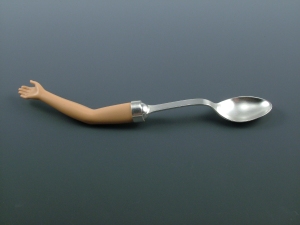 “From the day we are born, our behavior and tastes are controlled by the social status quo. Little girls are fed an idealized image. Barbie has been deconstructed and reassembled for even easier consumption.” 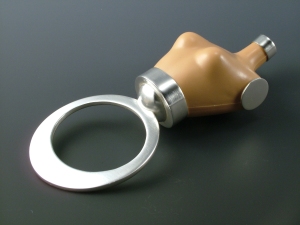 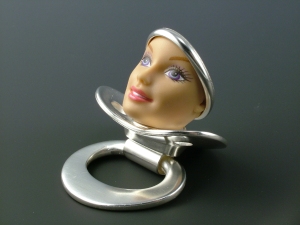 As a first generation American,  Escalante’s father had stressed American identity over cultural ties. Today, her work explores the conflict she feels, caught in the kaleidoscope of identity, gender roles, and societal norms.

Her work can be viewed this month at an exhibit titled, “CONTROL” at New York’s Ceres Gallery.

Here’s what these pieces say to me.

Like most little girls, I grew up spoon fed on Barbie. But not just Barbie. She was an emblem of all that mass media, friends and schoolmates, told me to be. A good shopper. Paired with Ken. Skinny and curvy all at once. The emblem of perfect womanhood, where body defines us.

Oddly, all this spoon feeding can lead to a dearth of feeding of any sort. I’ve gone through phases of not eating like I should, hoping to look like what turn out to be phony photoshopped images that don’t even resemble the starving models who posed for the pics.

What did I know?

Of course, skinny isn’t enough. We must be buxom, too. Which leads to unnecessary, and sometimes life-threatening, surgeries in pursuit of Barbie breasts. At least that’s what happens when boobs define us, creating our worth. For too many women and men, surface is all.

When women are told they must acquire surreal measurements, and when obtaining them is the source of self-worth, the pursuit takes unending time and energy.

Obsessed with diet and exercise, women can become distracted from the rest of life; so much so that (as Naomi Wolf can tell you) advances of the women’s movement can quickly wane. Frantic pursuit of the perfect body removes agitation for power of greater substance.

Any wonder the exhibit’s theme is “CONTROL”?

This piece can be viewed at “CONTROL,” an exhibition of  California women artists presented by The Women’s Caucus for Art at New York’s  Ceres Gallery, February 1 – February 26th, 2011.

For more on Yvonne Escalante’s work go to ARTslant.