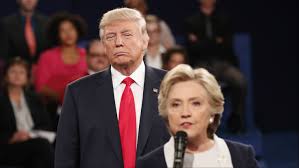 Trump at the second debate.

Trump insults women and others but his actions are to the contrary. He hires women on an equal basis, like his daughter Ivanka and his campaign manager Kellyanne Conway. He’s more bark than bite.

That’s from one of my readers.

Unfortunately Trump seems to behave that way too, given sexual assault and discrimination charges against him.

Actually, some men are more likely to assault and rape women than others, and their behavior is related to words. Men who routinely degrade women, like you so often find in football locker rooms and fraternities, are significantly more likely to harm women than Average Joe is.

But words hurt too.

“Just talk” creates a hostile and demeaning climate toward women and minorities.

I do not appreciate people who propagate such hatred and degrading attitudes toward me and my kind. Or anyone, for that matter.

Many men get it

Some men were surprised by the negative reaction to Trump’s “locker talk” video. I watched a guy in one focus group defend him: “All guys do this.” But the women let him know that they found it upsetting, and hoped — and believed — that all men don’t behave that way.

And not all men do think or behave that way. Here’s what Lee Goodman-Gargagliano told the New York Times:

When Donald Trump refers to his gloating about sexually assaulting women as “locker-room talk,” it is not any kind of defense; rather, it is an indictment of male socialization in locker rooms and other venues across the country. The casual, behind-closed-doors sexism that Mr. Trump excuses directly feeds male entitlement and rape culture.

And here is Daniel Pellegrin’s view:

Over the past 55 years I have been in many locker rooms: football, track, high school, college, racquetball, country club, golf. I have never heard in them the language used by Donald Trump.

He demeans men when he claims that his language is common to us. It is not. His claim, if believed, would lower women’s view of men: We are not the pigs Donald would have them believe we are.

The number of men who now say that Donald Trump is misogynistic has increased by 10 percentage points since the video of him boasting about assaulting women went public.

Fortunately, the man I quoted above gets it too. As he later explained:

I hear the pain and oppression this attitude has caused you. I’m sorry for that. It’s heartbreaking when you hear it in a personal manner.