← How Not To Do Open Relationships
Strip Searches Strip Our Liberty →

I Didn’t Want To Be Pretty

Man clothes, dark, heavy makeup, scarcely a trace of femininity: that was me in high school. I hated the notion that girls had to be pretty and were valued only for their looks. I wanted people to appreciate me for being fun, funny and a good debater.

I felt like women made themselves out to be pretty idiots because they were naturally shallow and stupid.

And envious. I hated the competition between females, so I looked as weird as possible hoping no one would see me as a threat.

Men don’t see attractive males as threats. They’re high-fived for getting women – the more the better. I wanted sisterhood, but was really more interested in having “brotherhood.”

It was a strange place to be, looking down on females as a female, and not wanting people to care whether I was pretty or not.

Yet part of me wanted very badly to be pretty. I believed I was hideous.

Despite a wholehearted attempt to free myself from incessant judgments on my appearance, I developed severe issues with self-image and self-esteem.

I saw myself being sidelined because of how I looked. I began to resent working that much harder to keep myself relevant and earn respect when other girls just stood there looking pretty. I felt trapped by society, my body and my inability to change myself or anything around me.

And so I fell into disordered eating in a desperate attempt to gain control over something. It didn’t work. 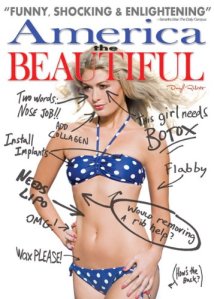 The film, America the Beautiful offered a clue. The film tells how businesses make money when women feel dissatisfied with the way they look. If women weren’t satisfied, they wouldn’t spend money to make themselves “better.” I saw how we are manipulated.

As I studied more I began to see what it means to live in a patriarchy. It had never occurred to me that denigrating women’s appearance and capabilities could be a reaction to women’s gain of rights and power. If women have equal rights, you can still defeat their souls by draining their self-worth as they strive to live up to impossible standards.

The revelation was freeing. I didn’t have to accept impossible standards. I even stopped seeing anorexic models as attractive.

Now I feel that “pretty” is neither something to be obsessed over nor obsessively avoided. And I don’t think “attractive” comes in only one form. And that is freeing.

Victoria is a student who gave permission to post

Popular Posts on BroadBlogs
Am I Ugly? Girls Ask YouTube
Keep Your Boobs, Get Better Guys
I Can’t Believe I Ate A Whole Head Of Lettuce!

← How Not To Do Open Relationships
Strip Searches Strip Our Liberty →