← Men Rule… Because They Make the Rules
Do Wrinkle Creams Work? Who Cares? → 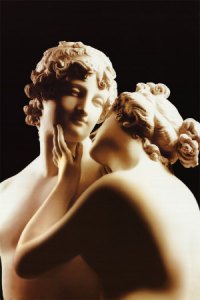 Honesty is the best policy in relationships, right? Show yourself as you really are and your partner should accept you, warts and all. And be sure to see your partner’s warts, too!

So if your girlfriend asks if her new jeans make her look fat you should frankly respond, “No fatter than the rest of your clothes.”

Honesty may be overrated.

Psychological research is mixed. One study found that couples who idealized each other early in a relationship were likely to still be in love months later. But couples who saw each other realistically early on felt less in love, or had broken up, over the same time period.

In fact, passionate love makes us see each other in an idealized way — love is blind! But when we are passionately in love we also put our best self forward. We look nicer and we act nicer.

So we fall in love with idealizations, not realities, which can be hard to sustain over time.

And we probably want to be known and loved for who we really are. We want others to see us as we see ourselves. (But in another twist, most of us see ourselves through a positive bias.)

Maybe we want our lovers to see us both how we really are and in a flattering light, the researchers suggest, since the contradictory findings were looking at slightly different things. We want to be accurately seen when it comes to little things like whether we can be charming in front of their friends and family. But we also want them to have a favorable view of us – we’re wonderful, intelligent and physically attractive – in the broader sense of who we are.

Maybe we really want our partners to see our best selves, focusing on our finest traits and playing down aspects that aren’t so hot.

As the researchers point out, marriage in Victorian times can seem pretentious. Each partner dressed for dinner, tried to look nice at all times, were courteous and kept up their best behavior – almost as if they were still courting. But all this helped their partners to see them in the most favorable light. And these marriages were the longest lasting in Western history.

Maybe it’s not a bad idea to be on our best behavior with the ones we love.

And if your girlfriend asks if her new jeans make her look fat, why not honestly tell her that you think she’s beautiful?

Popular Posts on BroadBlogs
Passionate Love: Like a Drug, or Mental Illness
Should You Ask Why Your Lover Loves You?
Who Falls In Love Faster? Men or Women?

← Men Rule… Because They Make the Rules
Do Wrinkle Creams Work? Who Cares? →