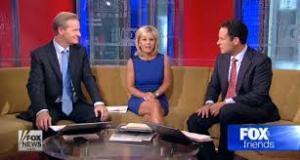 Fox and Friends with Gretchen Carlson

Why do conservatism and misogyny so often go hand in hand?

She says that her “Fox and Friends” cohost, Steve Doocy, saw her as little more than a blonde prop. Instead of treating her like the intelligent and educated (Stanford and Oxford) journalist she was, he engaged in sexual harassment and belittled her during commercial breaks.

Two former female staffers anonymously back her up.

But who needs anonymous backers when you’ve got video?

In 2012 Ms. Carlson walked off the set when cohost, Brian Kilmeade made one of his sexist jokes. Another time, Steve Doocy grabbed her arm and shushed her on a live broadcast. And Bloomberg politics created a mash up of the sexism that has bombarded Ms. Carlson over the years:

When she finally complained to Fox chief Roger Ailes, she says he called her a man-hater and told her to get along with the boys. And then suggested:

It’s not just Fox. Sexism and harassment are rampant within conservative bastions like college fraternities, Wall Street, and Trump rallies (where you can get a pin saying “Trump that bitch”).

Why are conservatives so often misogynists?

Conservatives like stability and hierarchy. Particularly when they sit atop that pyramid.

And right now men are up top. But men aren’t naturally better than women so sexist men work to create a sense of female inferiority. 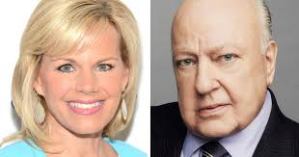 So does sexual objectification. And Fox News is well-known for its transparent desks that show off women’s legs.

But the world is changing. As Jim Rutenberg at the New York Times explained:

At a time of fast-moving social change, Fox News can at times be viewed as a port in a storm for traditionalists who pine for the way we were — for the days when there was no gay marriage; no terms like “gender fluidity”; no doubt about the roles men and women were supposed to play and certainly no talk about the liberties men might take with female subordinates behind closed doors.

(Fox is facing) the same gale force that is sweeping through Hollywood, Silicon Valley and Madison Avenue, bringing into the open generations-old patterns and behaviors that were never O.K., but were for so long abetted by silence.

Yes, times, they are a changing.