End the violence against women!

In college I grew to hate frat boys. They didn’t always deserve it, but too many did.

At San Diego State “The Daily Aztec” reported on a fraternity accused of shouting racial epithets at strippers.

At UCLA someone slipped a frat songbook to a feminist group on campus. Lyrics went something like this: “Who can take his organ, dip it in Vaseline, ram it up inside you till it tickles your spleen? The S&M man.”

Those are the only lines I can bring myself to write.

I knew men who quit fraternities because they were disgusted by their antics, including sexism.

Unfortunately, I could go on.

This amusement depends on a double standard that celebrates promiscuous men but demeans the women — aka sluts and ho’s — who have sex with them. 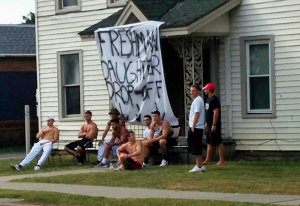 Women are more likely to be raped by fraternity members (three times more likely) than by other men. Partly because the “game” encourages men to get women drunk to help them “score.” But sex with an intoxicated woman is actually rape.

Other times, gang rapes are degradation ceremonies by which men work to create a sense of male power and superiority over their female victims. The point isn’t so much sexual pleasure as dominance.

Sexist chants also help to create a rape culture that dehumanizes women, who are seen as “outsiders, or commodities, or worse, as prey, and where men make the rules,” says Jessica Bennett at Time.

Yet frat boys are dehumanized too, through these inhumanities.

In an exploration of fraternity culture that sought to reveal what made the difference between safe and dangerous fraternities, A. Ayres Boswell and Joan Z. Spade talked to men who belonged to both types. Guys who belonged to dangerous frats said that they respected women on campus when they talked to them one-on-one. But behind closed doors they were pressured to disrespect them.

But why are frat boys so bent on insulting and intimidating women? I’ll discuss that in an upcoming post.