Yes Means Yes: There Oughta be a Law 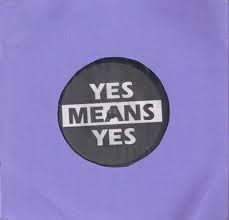 Should “no means no” be upgraded to “yes means yes”?

The California Legislature says state-funded colleges should do just that when determining whether a complaint constitutes rape. By a 52-16 vote in the State Assembly and unanimously in the Senate.

Drinking condemns her, gets him off the hook

But would that open drunk men to rape charges?

No fair, right? He’s drunk, so he can’t be responsible for his behavior!

And these aren’t equivalent situations. Because when a drunk person is attacked she or he is being harmed. But when drunkards attack, they are doing harm.

Doing harm should be punished. Not getting drunk. (It’s sad when some think a tipsy girl “deserves” whatever she gets, as though it were a punishment.)

The nanny state is bad

Oooooh! Don’t bring the nanny state into the bedroom!

Yeah… those are the same folks who want the nanny state in your bedroom all the rest of the time: no birth control, no right to terminate a pregnancy. Even if a woman’s life or health is at risk. Or if she has been raped by some drunk frat boy. And no gay stuff, either.

Nanny state worries are only used when convenient.

If you’re in a tizzy over the State Nanny taking away your freedom, you’re likely worried about freedom for the powerful… while ignoring the more powerless.

Before feminism, sexual assault law — and general ways of thinking about rape — mostly came from the perspective of men in powerful positions. Their views passed through the generations and became a part of our culture. Even today we’re still more likely to hear from the perspective of men in media, legislatures, courts… The male view becomes conventional wisdom, and both men and women internalize it.

But which is worse: Twenty-somethings guided by a so-called nanny state? Or rape?

And anyway, I wouldn’t want to settle for anything less than enthusiastic consent, with or without a law.