Blaming Victims of the Powerful

There is no honor in killing innocent victims

Trigger Warning: May be triggering for rape victims

Ten-year-old “G” was attacked in a rape so violent that it made a hole between her vagina and rectum.

She bled so heavily that she nearly lost her life.

In the hospital, G’s mother and aunt fretted over community pressure to kill her to retain family honor.

Little G felt homesick at the hospital, but no one had the heart to tell her that her family was conspiring to kill her.

Later, a doctor found G’s mother holding her daughter’s hand. Both were weeping as the mother said,

My daughter, may dust and soil protect you now. We will make you a bed of dust and soil. We will send you to the cemetery where you will be safe.

That happened in Kunduz, Afghanistan and was reported in the New York Times.

But nothing that sad, depressing and crazy could happen here, right?

Unfortunately, too many things come close.

Girls apologizing to their rapists

Katie Landry was raised in a conservative Mennonite home, and hadn’t even held hands with a boy, when she was raped. Two years later she told the Dean of Students at Bob Jones University, a Christian fundamentalist school.

The dean, Jim Berg, said she must have committed a sin to deserve the attack, and told her to ask her rapist’s forgiveness. 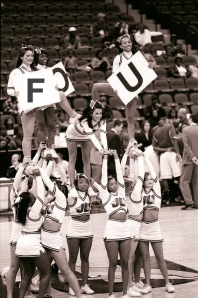 Cheerleader kicked off squad for not cheering her rapist

Kicked off squad for not cheering her rapist

In 2008 a 16-year-old high school cheerleader was kicked off the squad for refusing to root for the basketball player who raped her. School officials had asked her to avoid the school cafeteria and homecoming activities, too.

Turning to racism, a young biracial man named Larz was accosted by a student wearing a Klan hood at an Alta High School assembly in Utah. He reported on his blog:

When his friends saw that I had noticed they began pointing and laughing. I immediately demanded that he remove the hood. He then approached me and began dancing in my face and taunting me. I snatch the hood and threw it behind me and his crowd of friends became very displeased with this.

Seen through eyes of the powerful

So, people of color who don’t put up with racism are “n’s,” cheerleaders who don’t root for their rapists are kicked off the team, no one should talk of the sins of famous coaches, victims should apologize to their rapists, and honor lies in killing a young daughter who was brutally attacked. While her religious rapist goes free.

Too many of us blame victims who are harmed by more powerful community members.