← Vibrators Were Invented to Cure Hysteria
Blaming Victims of the Powerful →

Women against feminism? The epitome of patriarchy 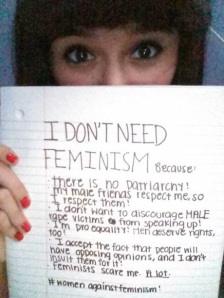 And then listing reasons why civil rights are such a bad thing.

Wouldn’t make much sense would it?

And yet women declaring themselves “against feminism” has become a thing on Tumblr.

Which sparks a couple of thoughts: 1) these women don’t understand feminism, and 2) why are women more likely than others to fight against their interests?

I’ll look at that first question in this post, and save the second for another day.

Feminism: women and men hold equal worth and dignity

For those who don’t know, feminism promotes the “radical” notion that women and men hold equal worth and dignity and should have equal opportunities.

Sure, plenty of people say they aren’t feminists, but once they understand what it is, most agree with the goals.

And the notion that feminists don’t respect their respectful male friends — as the young woman holding the placard believes — is just weird.

In fact, feminists typically like men more than non-feminists do, a University of Houston study found.

Dislike feminism because you don’t understand it?

Don’t like feminism because you don’t get it? Happens a lot.

One of my female students wrote a piece that I posted on BroadBlogs called, I Made Fun of Feminists… Before My Abuse.

Or, a woman named “Emily” told XO Jane that her younger self hadn’t liked feminism, either. When she read back on her high school “preferences,” she saw that she had disliked Rush Limbaugh, patriarchal “Promise Keepers,” and feminism. She now says,

OK. Politically, I was all over the place, probably because I had NO idea what I was talking about.

There is no patriarchy?

And think there’s no patriarchy, as some placards claim?

In patriarchies the most powerful positions are held by men. And men and masculinity are more valued.

We have not yet had a female US president, and the vast majority of the following are male, too: Congress, Fortune 500 CEOs, religious leaders, media owners and writers, and most “heads of home.” I could go on.

In patriarchy, we are more likely to see things through the eyes of men. I say:

The fact that young women hold up signs protesting a movement that works for their rights is the epitome of living in patriarchy. 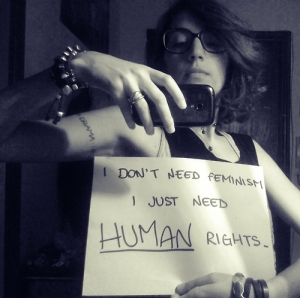 WTF? Diluting energy away from the march toward equality

At least one placard says feminists discourage male rape victims from speaking up. And that we don’t think men deserve rights.

Well, the feminist “me” has written on men’s rights and male rape victims.

At the same time, insisting that women should be pro-equality or humanist instead of feminist is meant to drain energy from the the work toward equality.

Imagine if blacks were told they must fight for white rights, too. Surely, a mere ploy to distract from achieving racial justice.

Oh, and you’re not a feminist because you don’t insult people who disagree with you? You don’t see that your words are insulting?

← Vibrators Were Invented to Cure Hysteria
Blaming Victims of the Powerful →