← Anything Good About Being A Sex Object?
Elliott Roger Blames Women For Patriarchy’s Problems → 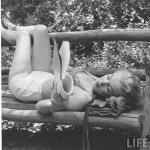 Marilyn Monroe would have turned 88 on June 1, had she lived. And while her star rose in the middle of the last century, she remains the ultimate sex symbol even today.

Yet she yearned to be so much more.

Her beauty masked her intellect, which Karina Eileraas portrays over at Ms.:

Insatiably curious about art, literature and philosophy, she routinely carried books to movie sets. Auctioned by Christie’s in 1999, Monroe’s library encompassed a range of works that spoke to her longing to achieve intellectual and spiritual transformation. From James Joyce’s Ulysses to F. Matthias Alexander’s Man’s Supreme Inheritance, Tolstoy, Twain and Gibran’s Jesus, many of the books evidenced Monroe’s active engagement in the form of underlining, pencil marks and marginalia.

And she was astutely aware of both the costs and privileges of her objectification, as she mused,

That’s the trouble: A sex symbol is a thing. I just hate to be a thing. But if I’m going to be a symbol of something, I’d rather have it sex than some other things they’ve got symbols of!

Feminist, Gloria Steinem writes about a chance meeting with her. Back when Gloria was a student and Marilyn was a star, they both ended up at the celebrated Actors Studio, where students were acting out the highbrow plays of Arthur Miller, Eugene O. Neil and the like. Marilyn wore a shapeless sweater, a scarf over her hair, and no makeup as she sat in the back and watched. Steinem says:

She was a student, too, a pupil of Lee Strasburg, leader of the Actors Studio and American guru of the Stanislavski method, but her status as a movie star and sex symbol seemed to keep her from being taken seriously even there. She was allowed to observe, but not do scenes with her colleagues.

In a grab at respect Marilyn eventually persuaded Laurence Olivier to direct her. But the accolades never came.

Marilyn Monroe, lost a in book.

Later, she married Arthur Miller, perhaps hoping that some of his respect might rub off on her. It didn’t. Steinem points out, “Women don’t gain serious status by sexual association.”

Still, the marriage took courage since Miller had been labeled a “subversive” and was asked to testify before the House Un-American Activities Committee.

Later, in a stand against racism when a career-making LA nightclub refused to book Ella Fitzgerald, Marilyn promised the owner she’d sit at a front table every night that Ella performed. Ms. Fitzgerald was grateful, saying she never had to play small clubs again.

In her last interview Ms. Monroe asked a reporter to end with this:

What I really want to say: that what the world really needs is a real feeling of kinship. Everybody: stars, laborers, Negroes, Jews, Arabs. We are all brothers… please don’t make me a joke. In the interview with what I believe.

When women, young and old, become obsessed with looks, thinking hotness is all, maybe we can remember Marilyn and what she has to teach us.

← Anything Good About Being A Sex Object?
Elliott Roger Blames Women For Patriarchy’s Problems →