← Are Women Sexually Ravenous?
No GOP War On Women?  →

Beauty Tricks To Remove Your Self-Esteem

The lure of big money is likely a draw. But there’s probably also a yearning to feel beautiful, and therefore, worthy — and at the top of the pecking order.

As she was prepping for a TED Talk on the subject, Cameron learned that:

Of the 13-year-old girls in the United States, 53 percent don’t like their bodies, and that number goes to 78 percent by the time that they’re 17.

But if you are looking for self-esteem, modeling is not the way to go, she adds,

I am insecure. And I’m insecure because I have to think about what I look like every day. And if you ever are wondering, “If I have thinner thighs and shinier hair, will I be happier?” You just need to meet a group of models, because they have the thinnest thighs and the shiniest hair and the coolest clothes, and they’re the most physically insecure women probably on the planet.

The models portray an ideal to grasp for. But the goal cannot be reached — given the mix of starvation, Photoshop, and 14-year-old bodies that is required.

But it goes beyond that. Cameron says the pictures aren’t even her. They are constructions.

This picture is the first modeling job she had. She looks like a sex vixen. Yet she hadn’t even had a period yet. And it was the first time she had worn a bikini. Next to that picture is Cameron with her grandma just a few months earlier. 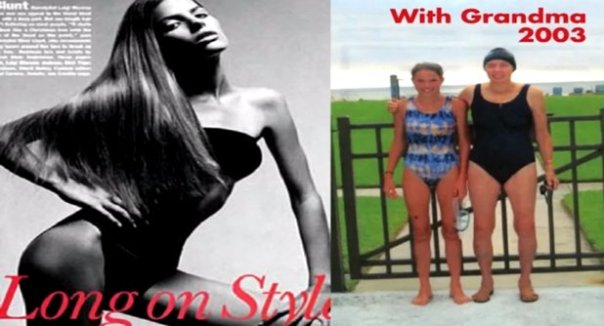 And as she says in the caption below, she’d never even had a boyfriend before this shot was taken:

Now check out the contrast between Cameron in V Magazine and Cameron on her soccer team:

And here she is today. In real life, and as fashion construction. 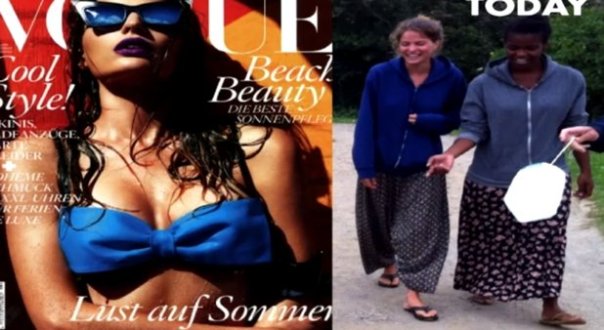 So if you look at these kinds of pictures in fashion mags and don’t feel as sexy and hot as Cameron, no matter how hard you try, don’t feel bad. She didn’t – and doesn’t – look that way, either.

You can see the whole TED Talk here:

← Are Women Sexually Ravenous?
No GOP War On Women?  →