← The Brain on Love vs Lust
Murder-Suicide and Jock Culture →

11-Year-Old Blamed For Her Rape 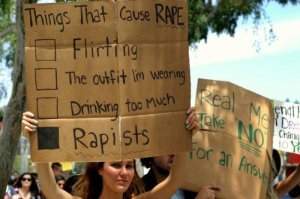 “It should not be this hard to get it through anybody’s head that an 11-year-old child who’s been repeatedly abused is not the problem.”

That’s Mary Elizabeth Williams over at Salon bemoaning that a young girl has been repeatedly blamed for a gang rape meted out by 20 boys and men.

The townspeople of Cleveland, Texas began the indictment, complaining that:

She dressed older than her age, wearing makeup and fashions more appropriate to a woman in her 20s. She would hang out with teenage boys at a playground.

The New York Times reporter who covered the case seemed to think the charge held merit, obediently recording the concerns.

Next, she was blamed in court.

As 20-year-old Jared Cruise stood trial his defense attorney, Steve Taylor, told the jury that she had never reported the rape to police. And that,

She had never shed a tear nor voiced a single complaint about her sexual encounters with any of the 20 males accused of assaulting her two years ago.

When he asked if she had been a “willing participant” she said, “Yes, sir.”

Actually, on her affidavit she said that the men had threatened to beat her if she did not do as she was told. That may have seemed to her like willing compliance.

Taylor then accused her of being, “Like the spider and the fly. Wasn’t she saying, ‘Come into my parlor, said the spider to the fly?’”

Her attorney retorted, “I wouldn’t call her a spider. I’d say she was just an 11-year-old girl.”

Taylor scolded, “I hope nothing like this ever happens to your two teenage sons.”

Because, as Williams points out,

Apparently those four months of sustained sexual abuse against a child are something that happened to Jared Len Cruise and 19 other guys.

The girl’s lawyer then played the rape video, saying, “Look at how proud [Cruise] is on that video as his buddies say ‘beat that ho.’”

“Beat that ho.” Yes, that sounds exactly like what a little eleven-year-old would tempt men to do to her.

Victim-blaming often works because so many blame girls and women for their assaults.

Too many believe that women take pleasure in rape even though it doesn’t involve foreplay or clitoral stimulation. And most women need emotional connection to enjoy sex. Since men get off on straight intercourse many think it’s great for women too.

Why didn’t she report the assault to police? She may have felt ashamed or not known that she could. She may have feared the men’s further retribution. Abused kids often feel powerless and unsure what to do. And how do we know that she never cried?

Last week Cruise was convicted of assault. I guess the jury didn’t believe that an 11-year-old “wanted it.”

But if she’d been older, would he still have been convicted?

← The Brain on Love vs Lust
Murder-Suicide and Jock Culture →