← Mississippi Morals: So What if Women Die?
What If Women Went Topless? → 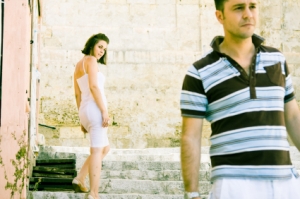 Lately I’ve been asking why women don’t get so excited by naked men, why women are often uncomfortable with male nudity on stage and screen or in print, and why these nude men can seem “gay” to the women who gaze at them.

Elizabeth Hall Magill has been asking the same questions over at Yo Mama. And she’s wondering how women can better appreciate the male form, without objectifying them. Here’s an excerpt from one of her posts.

So—where does that leave a woman’s gaze?

Neither here nor there.

And yet, we have eyes. We gaze. And we like what we see.

As I pondered this issue, I realized something: perhaps men posing sexually seem homosexual not only because we are used to the male gaze. Perhaps it is also because we are used to the female pose. And here we encounter a difference between media (artful or otherwise) and life: real sexiness is rarely posed. It just happens. But in “sexy” pictures of women, the women are aware of the gaze and arranging themselves for it. So, when a man does the same thing, we read him as feminized. And when a man strips for a woman, he can be seen as “performing” something generally feminine, and therefore we define it as insincere, the object of a joke. Not true eroticism.

In one of my favorite essays of all time, Looking at Women, Scott Russell Sanders says:

When I return to the street with the ancient legacy of longing coiled in my DNA, and the residues from a thousand generations of patriarchs silting my brain, I encounter women whose presence strikes me like a slap of wind in the face. I must prepare a gaze that is worthy of their splendor.

This is how I feel about men. And I bet I’m not the only one.

We’re all conditioned to ignore the fact that women feel this way about men. How many times a week do you think a man checks out his wife as she reaches into the refrigerator to get something from that bottom drawer, or reaches high above her head for a rarely-used dish? How many times a week does he check out the women walking by him on the sidewalk, riding a bike in the gym, or sitting in the next office? Magazines love to make little pie charts telling us about how often the male brain does these things. I’ve never seen a pie chart telling me how often the female brain does similar things.

Men get things from the refrigerator or the top shelf, and often look damn good doing it. They walk on the sidewalk, ride bikes, and work right next to us, looking good all the while. And women notice.

And then we need women talking about it—not giggling, not blushing, not encouraging men to mock the idea of their own desirability. Somebody ought to talk about it so often and so loudly that a pie chart becomes inevitable, cause we just know women are thinking about sex so dang much that we better measure it.

After that, we need female photographers and directors, tons of them, taking pictures of and telling stories about men being men. Holding babies in the middle of the night, shirtless and vulnerable and full of fatherly love and strength. Squatting in the middle of a road, looking at a rock (clothed, as squatting naked in the middle of the road is unnatural and possibly unsafe). Running on treadmills, making copies in the office while wearing snazzy ties, washing the dirt off their hands after a day working outside, laughing with their friends, kicking a tire and making dinner and coming home at the end of a long day. We need to see men being men through the eyes of women, not men posing as the objects of female desire. And we should see them in all their shapes and colors—in all their splendor.

You know what I think?

Which means the female gaze would no longer be marginalized, masculinized, or mocked. It would be honest, and it would be powerful—as powerful as desire itself.

← Mississippi Morals: So What if Women Die?
What If Women Went Topless? →