← The Cure for Cellulite
Vibrators Were Invented to Cure Hysteria → 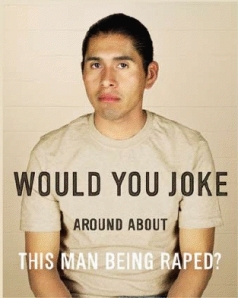 A 43-year-old German man met a 47-year-old woman in a bar. He went to her home and had sex with her, but when he wanted to leave she trapped him and demanded more. Seeing no other choice he agreed, expecting that afterwards she would let him go. But more wasn’t enough. Desperate, he fled out a balcony and cried for help.

She met her next victim on a bus. After his ordeal he was found “sobbing in the street” and begging the police, “Oh God, it was hell. I can’t walk. Please help me.” Sounds like she wounded him to prevent his escape.

Police charged her with sexual assault and illegal restraint. Yet the press is not calling her what she is: a rapist.

Beneath a photo of a couple in bed, the Mirror described the woman as a “nymphomaniac” while the Province posted the story next to a couple pictured blissfully in bed, and called the woman merely “insatiable.”

The inability to see this as rape likely stems from stereotypes about what rape is and who commits it.

Some people simply can’t conceive that men can be raped or that women can rape men. And that is likely mixed up with notions that men always want sex, and are – or should be – insatiable, themselves. And then there’s the belief that men can always overpower women, regardless of “technical help.”

Other stereotypes hold for both male and female victims. Such as, “What do you expect if you go to his/her apartment?” Or, “Once you say ‘yes’ you can’t say ‘no.’”

Some believe “rape myths” (false notions about rape) because that’s what they’ve always heard. Others hold to them because they make them feel safe. If a woman believes that only “bad girls” get raped, then she can feel more safe and secure. If a man believes that women can’t rape men, then he can feel secure, too.

Some just don’t get that rape means “sex without consent.”

← The Cure for Cellulite
Vibrators Were Invented to Cure Hysteria →