When women look at men who are sexily posed or who show skin, they don’t always seem sexy, as I’ve discussed before. Is there any hope?

First, the problem: Imagine watching the Bikini Open “in reverse” so that women are fully clothed while men wear revealing Speedos. What about nearly nude men dancing on platforms? Or a camera focused on a man’s butt as he walks by. All this may look sexy. But women may well see it all as “gay.”

In fact, a sexily posed man may be played for laughs, a favorite ploy of Sacha Baron Cohen.

But then, women are so used to sexualized bodies being meant for men’s “consumption” that women can come to see nude or near-naked men through men’s eyes, too. And of course, sexualized images of men that are meant for men would be gay. (Nothing wrong with being gay, but it’s not a big turn-on for women.)

Yet David Beckham can show skin and still look sexy. Maybe it’s because he seems so hyper masculine and hetero that it’s hard to think of him as gay. Sociologist, David Mayeda, has been theorizing on what makes men seem sexy to women. He describes Beckham this way:

Tattooed, rugged, athletic, showcasing a lean musculature and menacing glare, Beckham embodies a (dominating) masculinity… he is globally recognized, financially wealthy, and married to a woman who also holds currency in popular culture. This last point is critical. By being married, Beckham confirms his heterosexuality, and her extraordinary beauty and international popularity raise his standing as a “real man.” 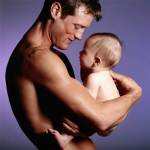 So must men be hyper masculine to seem sexy? Not always. Plenty of women find buffed men holding babies alluring. Again, the images are muscular and masculine. Having produced a baby he sure looks hetero. But the loving care signals something of the feminine side: sensitivity, not dominance. He’s masculine in a fatherly way.

Men are sometimes confused by women who want masculinity and tenderness. This just goes to show that many women do like both — perhaps especially combined. And who knows, there may be extra appeal in the sense of a man who appears committed to his partner and family.

Looks like “sexy men” too often fit inside a box that is as narrow as the box for “sexy women.” The current feminine ideal is skinny with big boobs while the current masculine ideal is limited to hard-bodies + dominance. Or toned + sensitive.

Luckily “sexy” and “attractive” can also exist outside the “bodily sensual” box for both women and men.

Enter Don Draper who is sexy by way of his face, his confidence, and his success, despite being generously draped in clothing. This is a sort of sexy that may work like a dog whistle. No bare skin to trigger notions of sexuality in men’s eyes, so that leaves women free to notice it.

But it would be nice for both sexes to move further away from our cramped boxes.

As a last note, this is all about imagery. Both women and men can find real-life men and women pretty sexy even if they don’t match these cultural ideals.

This is a repeat, but one response to Eric U’s question. Stay tuned for more.