← Charlie Sheen: Celebrating a Bad-Boy Who Abuses Women
Boob: A Breast? Or a Fool? →

My Son Likes Girl-Things. Is He Gay?

Random Moms across America think they know: My son has got to be gay. He wears khakis today but wore a dress to school from age 4 to 6; he used to do ballet and still doesn’t like sports; in preschool he was all about playing princess but now is all about Pokemon; and, in spite of the clear gender divisions in third grade, he plays with both girls and boys. I mean, what straight boy is into that kinda freaky gender mash-up?

Interestingly, few moms worry that their little tomboys will grow up to be lesbians.

But this mom gets LOADS of advice on how to turn her son “boyish.” Take away the girly toys and clothes, and enroll him in sports!

So much worry about girly boys.

Yet what we think of as “girl stuff” turns out to be “boy stuff” in other times and places.

Boys shouldn’t wear pink? Years ago the country staged a great debate on whether pink or blue should designate girls or boys. Some advocated pink for boys – such a robust color! Blue is so dainty.

The Cabbage Patch craze of the last generation led a lot of boys to want dolls. One of my little boy cousins got one for Christmas. Today most people would call him a manly man, complete with wife and baby. (And G.I. Joe is a doll, too.)

Ancient Roman men wore skirts, though the one on the left is armored! (A likely relief to some macho men out there.)  Other Roman men wore dresses (robes). 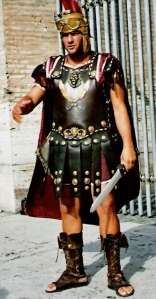 And we mustn’t forget men in tights, circa “Romeo and Juliet.”

Moving on to the court of the “Sun King,” Louis XIV, we find him wearing lots of lace, ruffles, curls, and color. And gracefully posed!

The American founding fathers had considerably less glitz, but they still wore more color, lace, ruffles, and curls than most men today would be caught dead in. They also hired instructors to help present a more graceful appearance. One of my male students asked, “Ok, but what did the manly men wear?” This is what they wore!

In more modern times, Scottish men can still be partial to skirts, though they call them kilts. Below are traditional and more recent versions of the garment.

Perhaps the most surprising expressions of manhood come from a culture entirely different from our own: the Wodaabe of Nigeria in Africa. There, men adorn themselves with makeup and jewelry. Because white eyes and teeth are part of the beauty ideal for men, they often roll their eyes and show their teeth to show off these features.

In our own time and place there’s Rod Stewart, who seems to be strongly hetero by all accounts. But check out these shots:

There’s a difference between sex and gender. Sex is biologically-based. It’s made up of our genes (xx for girls, xy for boys), hormones (testosterone, estrogen), anatomy (vagina, penis, breasts, etc.). But gender is all made up. Or what cultures make up to mark biological differences.

← Charlie Sheen: Celebrating a Bad-Boy Who Abuses Women
Boob: A Breast? Or a Fool? →