← Once Was, Virgins Had Sex
The Rapist In Our Minds → 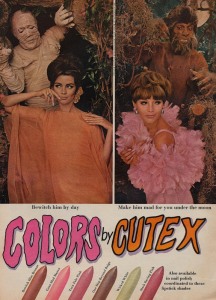 A fully clothed woman is bewitching?

Looking at old ads suggests something about how we’ve changed and how we’ve stayed the same.

A perusal of Sociological Images’s past Halloween posts revealed an ad that they had found on Vintage Ads. It looks like it’s from the 1970s.

The first thing I noticed was the allure of a fully clothed woman who is showing off pretty much no curves. Don’t see that much anymore.

But even as things change they stay the same. Both now and then women are portrayed as the object of the male gaze.

1970s men, on the other hand, apparently needn’t be attractive at all, as we witness Mummy and Werewolf. Both today’s men and women are more objectified.

Meanwhile, those 1970s men are predators, a portrayal that seems less common today.

So things have changed in ways both good and bad.

← Once Was, Virgins Had Sex
The Rapist In Our Minds →