← The Evolution of a Beauty, a Beast and Us
School Scandal Targets “Her” Not “Him” → 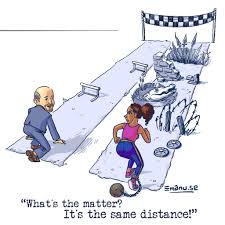 I’ve often thought how nice it must be to be white.

Popular, attractive, upper class: these are words I’ve come to associate with whiteness.

But until recently I hadn’t given much thought to privileges I gain from being male.

So I decided to make a list of ways in which I am privileged by being male:

Men have many role models, which makes it easier for us to see ourselves as Presidents, Congressmen, CEOs…

Men are more likely to be hired and promoted

Men are never shamed for having sex

When a woman is raped she is often disbelieved or even blamed for it, instead of the guy who raped her

I would recommend that everyone think about how they might be privileged, whether by gender, race, class, sexual orientation, good looks…

… and think about how we might create a more equal and just society.

We all deserve to be treated equally and fairly.

← The Evolution of a Beauty, a Beast and Us
School Scandal Targets “Her” Not “Him” →