Hillary Did Win the Popular Vote

I am a Hillary Clinton supporter and very excited to vote with my grandmother, who is 93. Just 3 years before she was born the US granted women the right to vote. She is also excited to vote for the first female president and is delighted with how far our world has come.

That’s from Maddy, one of my students.

Hillary Clinton may not have broken the Presidential glass ceiling, but she did make history.

2016 was the first time that Maddy’s grandmother, Maddy and I were all able to vote for a woman for President of the United States.

Not only that, she won the popular vote!

If we lived in any other country we would now have a woman president.

Instead, we have an electoral college that is mismatched with the actual will of the people.

That needs to change! Because the will of the people is being thwarted by an archaic system.

HRC won the majority of the people’s vote. But she also had to work against our unconscious biases against strong female leaders. 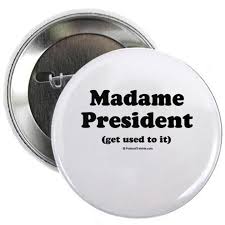 It’s “normal” for men to seek status and power. But when women do the same thing they get called “feminazi” and feminism becomes “the F word.”

Hillary was demonized by far right and far left, alike.

As Claire Cain Miller at the New York Times points out, insulting powerful women cuts them down to size. As when Donald criticized Hillary’s body and when Rush Limbaugh fretted at the thought of seeing a woman age in office — put downs that both attack women and imply that their worth lies in their looks.

Usually the insults are subtler, playing to stereotypes, says Miller. Strong women like HRC are “angry.” Or “emotional,” not a rational leader. And does she have the stamina to be president, or is she too weak? Some also “insulted” Hillary Clinton by calling her “a grandmother” — belittling women with children in an agist slap, as well.

A quarter century ago Hillary and Bill began facing a barrage of mostly made up scandal in an attempt to delegitimize their governance. The scandal mongering may have been a reaction to their liberal attitudes during a more sexist and racist era. As with witch hunts, if you repeat an accusation often enough people start to believe it. Where there is smoke there is fire? Sometimes it’s just smoke and mirrors. But a quarter century of demonization has stuck.

We are emerging from a history of ism’s

HRC may not have won the election due to our quirky election rules, but our votes for Hillary Clinton and Barack Obama show that we are gradually moving away from our sad history of racism and sexism. Which is unfortunately being met by a strong backlash.

Too bad. HRC would have been an amazing President!