Today is an exciting day for me.

At last a woman has become the nominee of a major political party. And Hillary Rodham Clinton is one of the most qualified people to ever run for President:

The bad old days for women

The Donald appeals to many sexist voters. Sad.

A few things women (especially married women) often could not do in the bad old days:

Those were problems back in the 1800s.

Here are a few things women could not do in the more recent bad old days — or sometimes even now: 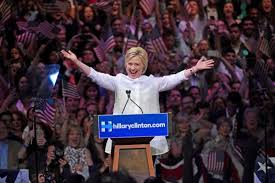 But can Hillary win?

This turn from being prohibited from voting to the promise of a woman as President of the United States lifts my heart!

As the New York Times put it:

This achievement is worth cheering by all, regardless of party, because it further opens the door to female leadership in every sphere.

But can she win?

HRC now has the vote of over half the people in the Democratic Party (not superdelegates). And while it’s true that Bernie is more popular among the general electorate, no one has attacked him. It’s easy to be popular when no one criticizes you.

Yet Hillary has been pilloried since 1992. (The accusations rarely hold up. But if you repeat something enough people start to believe it.)

Ms. Clinton gets pushed down but gets back up again.

She recalls this advice from her mother:

She told me to never back down from a bully, which it turns out was pretty good advice.

If anyone can deal with a bully like her likely opponent, it is Hillary Rodham Clinton.

I call her an inspiration.