← Sex as Religious Experience
If She Was Drunk, Did She Rape Herself? →

That’s what Justin Trudeau — Canada’s Prime Minister — once worried when he saw the term “barbaric” in an official government document condemning those cultural practices. (He later changed his mind and decided that these things were, indeed, barbaric.)

He’s not the only one who’s tempted to overlook harm to girls in hopes of avoiding possible insult to the men who do these things.

A few years back a female German judge wouldn’t let a Moroccan woman get a fast-track divorce because she said that domestic violence was allowed in Islam.

But his pro-feminist guest, Tavis Smiley, worried about offending Muslim men — though he agreed that women must be treated better.

Since some will read about the practices above and think “Islam” I want to point out that none of the things I listed are in the Quran.

And, early Islam actually did much to promote gender equality. Under the Prophet Mohammed, women were assured the right to inherit and own property, as well as to work outside the home. Women also had the right to consent to marry. Female infanticide and slavery were forbidden. And protections from domestic abuse were instituted.

With Islam’s 7th Century founding, the religion was way ahead of many other cultures, including Christianity, on the road to female equality. 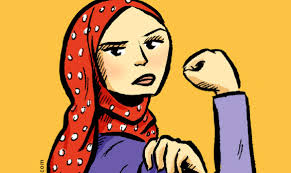 Muslim West Sumatra, Indonesia is one of the most peace-loving, egalitarian places in the world.

And, I know a number of Muslim men who feel that women should be treated equally.

Why are so many — Tavis Smiley, Justin Trudeau and that German judge — so quick to defend hurtful practices toward women and girls, so long as it’s “their culture”?

While ignoring the harm?

When ethnocentrism and sexism are at odds, which should prevail?

Seems to me that:

are all more harmful than any hurt feelings that might arise from criticizing those practices.

← Sex as Religious Experience
If She Was Drunk, Did She Rape Herself? →