← Religion Shutting Down Sexuality
Once and Future Gender Equality → 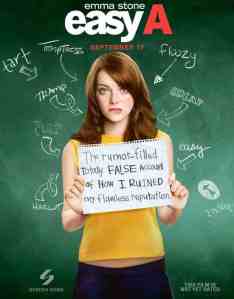 Emma Stone in “Easy A”

How does the double standard make sense?

And, how is it fair that guys can have lots of sex — and be rewarded, in fact — but women are shamed if they behave in the same way. It’s crazy.

But if you want to create a patriarchy that values and privileges men over women, the double standard helps to create that world.

When you have gender-equal societies you don’t get double standards. And evidence suggests that many early societies had gender equality.

But then patriarchy arose as warrior cultures celebrated what we now call masculine traits: physical strength, aggression, dominance, violence. And they overtook more peaceful, gender-equal plant-based societies. After which a sexual double-standard was often instituted.

Why? Take a look at a more recent non-patriarchal world that we know of. When Europeans first arrived on America’s eastern coast they met peoples who had no double standard.

Not knowing who daddy was gave women power

Not knowing who daddy was gave women a lot of power in those early, small communities where the village raised children. Family line was traced through women, couples lived with the mother’s family, clans were headed by women, and property passed from mother to child.

If you want male dominance, it helps to know who daddy is. So you limit women’s sexuality, but not men’s.

And then the double standard, itself, further creates a sense of male superiority.

When men may have a lot of sex, but women may not, you create a sense of who is free and who is not.

And when women experience natural sexual feelings — which are thought bad unless she’s married — that creates shame. Which translates to low self-esteem. And it’s easier to dominate and control people with low self-esteem.

But it makes a world of sense if the goal is shaming, dominating and controlling women.

[Parenthetical: Actually, these days men are more often against the double standard than women. Men like it when women easily want sex. But cultures that punish women’s sexuality leave them less interested. See here, here and here. But men and patriarchy are not the same thing.]

← Religion Shutting Down Sexuality
Once and Future Gender Equality →