← How To Suppress A Woman’s Desire
Credit Bill Too High? Don’t Pay! →

From Being Bullied to Being a Star 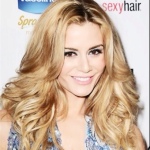 Young Brittany Mason was bullied relentlessly. And then she grew up to become a star. And an anti-bullying advocate.

Her torment began her first year of high school. Kids teased her, slashed her tires, and threw Barbie doll heads, or red paint, all over her yard.

Homecoming week was the worst. Some students created a giant poster with her picture on it, took it to a pep rally and chanted, “You are ugly.” Afterwards, they chased her from the bleachers and drenched her with water guns.

Britney tried to kill herself, but failed. Thinking back, she adds, “Thank God.”

After the suicide attempt she chose to do home schooling.

She says the experience was scarring and still haunts her.

But since then she has worked to make the best of her life, and that experience.

Kids said she was ugly?

She entered the Miss Universe beauty pageant and won the 2008 title of Miss Indiana.

And then she went on to become a successful model and actress who was featured on the 200th episode of “Two and a Half Men.” She’s even been known to mingle with the likes of President Obama.

Brittany has also devoted her life to promoting an anti-bullying message. After traveling the world, she finally returned to Anderson High — a place she had once hoped to leave behind forever. But on October 2 she organized an anti-bullying benefit concert in her hometown to help others.

Brittany has an inspiring story that helps us all to know that it does get better.

Thanks to Love, Ashley  for alerting me to this story.

Related Posts on BroadBlogs
Best Not To Be Popular In High School
Do Kids Bully from Low Self-Esteem? Or Because they’re Popular? No and No
Boys on the Bus Grasping at Fake Power

← How To Suppress A Woman’s Desire
Credit Bill Too High? Don’t Pay! →