← Less Sexism Means More Sex
Come Out, Come Out Whoever You Are → 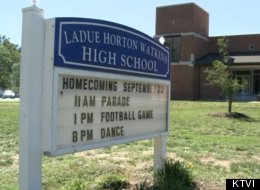 Each year around the last day of school, junior boys at Ladue Horton Watkins High in Missouri distribute an obscene list detailing the body parts, hygiene and sex habits of 5-10 senior girls.

Alhemeier went to see the principal, Bridget Hermann, who explained, “Well it’s kind of just tradition, it’s been going on for a really long time, there’s not much we can do to stop it.”

Administrators determined no rules had been broken.

No broken rules. Tradition. Whatever could one do?

After a push of letters to the school board Ms. Alhemeier was eventually invited to a meeting. “We have anti-bullying measures in place and there are plans to ramp those up,” she was told. Finally, those responsible were identified and “received immediate and long-term consequences.” No one’s saying what.

So here we have boys judging girls — and from the start of high school girls know it. Boys make the rules and girls are expected to conform. Girls know they’d better be careful, or they might end up on that list.

And throughout, these young men invade the young women’s space, verbally touching and invading their bodies, like a rape.

Whether humiliating, judging, or taking over another person, these boys are classic bullies, trying to raise themselves up by bringing others down – and in a way that goes beyond individuals and establishes a gendered pecking order: boys above girls.

All the while the adults are blinded by tradition, and maybe loyalty to traditional gender roles.

I was struck by a report that described Ruth Alhemeier as having no qualms about going public.

Why would she have qualms?

On the contrary, I couldn’t believe that this was the first time the matter had been brought up, or that she would have anything but the outraged support of the entire community.

Interesting that what seems horrifying to one group seems normal to others. Once it’s the status quo, everyone around accepts it.

Related Posts on BroadBlogs
In-laws Rip Off Girl’s Fingernails, But Who Cares?
Why Do Women Fight Against Their Own Interests?
Mind of a Rapist: Trying to Bridge a Gap between a Small Self and a Big Man

← Less Sexism Means More Sex
Come Out, Come Out Whoever You Are →