← Men Guarding My Purity
What’s Wrong With Hooking Up? → 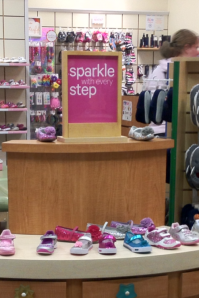 I work at a toy store. There’s a girl’s side and a boy’s side. The girl’s side is suffocated with pink and purple — with a small section of black and pink for the ‘rebellious’ little girl. This side stocks Barbies, Brats, Maxie dolls, baby dolls, stuffed animals, kitchen and food sets, cleaning sets, accessories, make up kits, pretend hair kits and real beauty products that are child safe.

Some girls hate pink and refuse to buy it. I can understand why. It has nothing to do with the color, really, but that is seems like the only color they are allowed.

The boy’s side has lots of colors – except pink. This side has video games, legos, super hero action figures and masks, toy swords and super hero themed weapons, Nerf guns, sport equipment and balls, army toys and weapons, battle ships, musical instruments, board games and chess. Boy toys celebrate violence and being tough. Even the boxes they come in are drawn with explosive effects.

Science themed toys have only pictures of boys — unless they’re painted pink or purple. A guitar aimed at boys is dark blue and painted with flames. The girl guitar is pink with flowers. Legos for girls are in pink and purple boxes with nice ‘friendship’ themed characters and sets. The action, city, and car themed Legos are for boys.

Another dad wanted a pink science kit with princesses on them. With none available, he settled on a pink princess electric piano.

A mom refused to buy Elmo or music themed toys unless they enforced the socialization she wished to impose on her daughter.

And parents seem to avoid bringing their sons anywhere near the girls’ side. Do they fear their sons might like the baby dolls or the pink makeup sets and don’t want to risk it?  One dad told me he only lets his three year old son go to the boy’s side because he likes the pink baby dolls, so dad wants to avoid them.

Toy segregation has consequences. As Katrin Bennhold at the New York Times explained:

Male and female stereotypes are established early: It is not hard to see a connection between girls playing with dolls and boys playing with cars, and the widespread segregation of labor markets into “female” and “male” professions. (Lower-paid, lower-status) nurses, primary school teachers and caregivers of most kinds are overwhelmingly female. Engineers, computer scientists and mechanics tend to be male.

Maybe parents believe that gender is biological and that their children won’t like toys that don’t “fit” the sex. But they’re unwittingly (or wittingly) creating gender through the toys they choose – with a lot of help from society and toy stores.

Popular Posts on BroadBlogs
Baby Named “Storm.” Sex Unknown
My Son Likes Girl-Things. Is He Gay?
It’s Ok To Be A Tomboy But Not A Sissy. Why?

← Men Guarding My Purity
What’s Wrong With Hooking Up? →