Getting Plastic Surgery to Stop Bullying 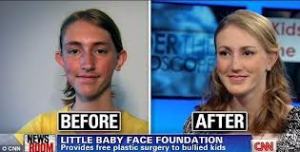 Fourteen-year-old Nadia Ilse got plastic surgery on her ears, nose and chin so kids would stop bullying her. She told Good Morning America:

I felt horrible. I felt like I was like dirt. They said that I have the biggest ears that they’ve ever seen. They called me ‘Dumbo,’ ‘elephant ears.’

Over time the bullying escalated. School became a nightmare, and she got so she couldn’t bear to look at herself in a mirror as she began to believe the slurs.

All this raises questions.

Like how the world seems to think that beauty – a plastic, superficial part of us — means something real. Like how moving a few millimeters of skin, bone and cartilage here and there makes all the difference. A few tweaks and kids go from bullying to accepting. And Nadia goes from crying herself to sleep and having suicidal thoughts to just going about her day.

Why do so many of us see the world in such superficialities?

I would like to ask the bullies if they would judge a person unworthy on such flimsy grounds if they were the ones whose ears were a bit large.

What if there is a God who purposefully creates people who go against beauty norms? What are we supposed to get out of that? Are we to develop empathy and compassion? Are we supposed to move away from the surface and superficial to see what really matters? Should we learn about what is real and what is ridiculous?

And should we really care what ridiculous people think?

Don’t care about what others think of you. What matters is what you think of them.

Popular Posts on BroadBlogs
You Are “Less Than”?
Best Not To Be Popular In High School
Boys on the Bus Grasping at Fake Power