← Love Hurts Others
Scrutinizing My Body Takes All My Time → 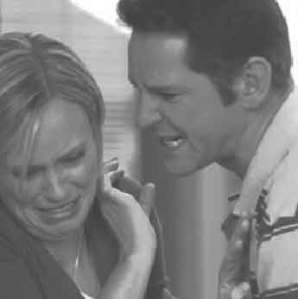 Constance Johnson was a domestic violence prosecutor – and also a battered wife.

She met her husband, Ben, in college and fell in love. They got married and were very happy for three years.

But then he began criticizing her. Everything was her fault. He was always right. She was too fat (at 110 lbs).

After they moved near her husband’s aging parents to help them – Ben’s idea — the violence began. He hadn’t seemed happy since the move and one morning he decided he didn’t like his breakfast.

“Make it yourself.” Constance told him.

Next, Ben shoved her onto their bed and told her not to “make him” hit her again. Later, he said he was very sorry.

Eventually Ben and Constance both entered law school, but after Ben dropped out to take over the family business the abuse escalated. Constance graduated from law school and developed a successful practice. But the more successful she became, the more violent he got.

She finally left him for good after he held a gun to her head in a fury.

The story of Constance Johnson reveals a huge problem with patriarchy. Men learn that manhood is all about being number one, being in charge, never showing vulnerability, never expressing emotions, and transforming any “weak” feelings into anger and rage – “manly” emotions.

Men learn that they are supposed to be powerful. But they aren’t always.  And when they aren’t, too many try to create a sense of power by hurting women – including those they love. When they beat down a woman, or take over her body in rape, they feel strong, at least for a few moments.

In my mind the greatest problem with patriarchy, at least for men, lies in “tough guy” ideals that look powerful but actually reflect weakness.

Boys learn that “real men” don’t show emotion or reveal what’s hurting inside. But this only leads to an inability to deal with problems and personal trauma.

How is this manly?? It is not. It is childish. The “tough,” “domineering” ideals of patriarchy reduce men to children who can only express themselves through “grown up” temper tantrums that result in violence directed at others. I cannot for the life of me understand how this is considered manly.

We must redefine what it means to be a man – which is difficult because the redefinition MUST include traits that are considered feminine — like expressing emotion in a healthy way.

Manhood includes compassion and understanding, not narrow thinking and an over inflated sense of entitlement. It is understanding that women are essential to men’s very existence and loving them for that.

I will do my best to facilitate changes in my own life, and encourage my friends to take positive stances on sexism and what it means to be a man. I will also speak up when I see injustices occur, whether they be against women or anyone else.

I suspect I still do many things that are sexist without even realizing it, but that’s what the learning process is about: learning to make yourself into a better person – to the benefit of yourself and everyone else.

← Love Hurts Others
Scrutinizing My Body Takes All My Time →