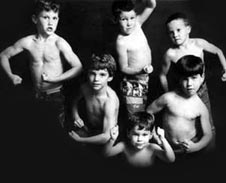 Boys and men can spend a lot of time putting on a tough guise, hoping to pass for tough guys.

The film opens with Dorothy pulling back the curtain of the Great and Powerful Wizard of Oz — who turns out to be a nervous and tragic man.

Or maybe you’ve seen the film, The Mask You Live In — say it fast and it sounds like “Masculine.”

What makes a man?

What don’t you let people see?

My heart. My pain. My anger.

Men are under constant pressure to cut off half of their humanity (their more “feminine” side) in order to be respected as “real men.”

And yet men who do so much work to create this pose are anything but real, let alone real men.

When a guy’s masculinity feels threatened he’s most inclined to take on this pose.

If he feels disempowered he may try to “get his power back” in a way that is actually fake, not satisfying — and even disempowering and harmful:

Do any of these guys end up with real power? Probably not. But many do end up in prison or dead: Not very powerful.

I’m reminded of something David Brooks once wrote about gangsters. To paraphrase:

A few highly alienated and fanatical young men find their self-respect by embracing the poses and worldview of American hip-hop and gangsta rap. They seem to have adopted the same poses of exaggerated manhood, the same attitudes about women. It’s built around the image of the strong, violent hyper-macho male who loudly asserts his dominance and demands respect.

You take a population of young men who are oppressed and who face limited opportunities, and you present them with a culture that encourages them to become exactly the sort of people the bigots think they are — and you call this proud self-assertion and empowerment. You tell them to defy oppression by embracing self-destruction.

And lacking the most important of human needs: love and emotional connection.

That tough guise looks a lot like a straitjacket.