Omar Mateen, Homophobic Homosexual? (Too unhappy to be gay) 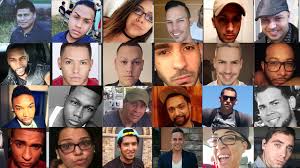 Victims of shooting at Pulse, a gay nightclub in Orlando, Florida.

Some wonder: Is Omar Mateen, who massacred gay men at a nightclub, a homophobic homosexual (too unhappy to be gay)?

But highly homophobic men who call themselves “straight” do, suggesting they are in denial (to themselves and others) about their sexual desire for men.

And that leaves them resentful, angry and lashing out at those who are free to be who they are.

Many boys who descend on their schools with guns are motivated by fears that they are perceived as homosexual and that attacking suspected or known homosexuals is a way for boys to demonstrate heterosexuality to their peers.

We will probably never know the true nature of Mateen’s sexuality, but he had used apps to meet men. He had visited the gay bar he attacked many times. And his ex-wife had wondered whether he was totally straight.

Did Mateen fear that if he didn’t do something drastic he might give in to temptation and go straight to Hell?

And did he believe that if he acted as a religious martyr (aligning with ISIL) he would go straight to Heaven, instead?

But does God honor those who harm others in selfish attempts to gain their own reward?

Well, that last question could be posed to anyone who harms others in hopes of gaining Godly reward. Including your run-of-the-mill homophobe who fights against equal rights as a pathway to Heaven.