Are Republicans Cracking Up?

There’s talk that the Grand Old Party might not live past 2016.

Because contradictions are arising within the party.

There are three primary types of Republicans — and a new emerging group. Here’s a brief outline of each coalition (with some overlap):

Republicans say that what is good for business is good for America. So they are for low taxes, low regulations, low minimum wage, bust unions… And get rid of government programs in order to have low taxes.

And because they are primarily aligned with the wealthy, they are especially concerned that the wealthy have low taxes.

But the majority of Americans aren’t wealthy or business owners. So the GOP must create coalition with other groups:

In the early 80’s Republicans began incorporating conservative Christian views: anti-gay rights, anti-abortion, anti-birth-control… to peel away folks who would normally vote Democratic because of their economic interests.

Cultural conservatives feel safer within the status quo — which has historically favored whites, men, straights and Christians. They are leery of cultural change.

Many also like feeling superior to others. So racism and sexism have been used to attract these voters, using the “Southern Strategy.”

Until Donald Trump, racism/sexism were only hinted at. Like this:

Ronald Reagan announced his Presidential run from fairgrounds located a few miles from Philadelphia, Mississippi, where civil rights workers had been murdered. Most people didn’t realize this. But many racists did — and it helped to get their vote.

But Trump blatantly trumpets sexism/racism and defends his “political incorrectness.” 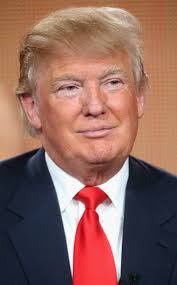 Racism/sexism helps to peel away people who would normally vote Democratic for economic reasons.

For the past 40 years pretty much all of the increase in America’s wealth has gone to the richest 1%.

The workers who help to create profits have been left out of sharing in them.

Many “Establishment” Republicans have used racism/sexism and Christianity to distract cultural and Christian conservatives (the coalitions above) from this fact.

Lately, it hasn’t been working. Among the right-wing working-class, Christians are trending a bit more toward Cruz and the rest are moving to Trump.

This new coalition doesn’t trust “establishment elites.” While they aren’t necessarily racist, many tie their low wages and evaporating jobs to “foreign competition” from Mexican immigrants and China. (Although a number of other things actually help to create their problems, as I’ve discussed.)

Schism in the GOP

The GOP is facing a schism:

“Establishment” wealthy/business elites are for free-trade and immigration (cheap labor) and many want to do away with things like Social Security, Medicare, Unemployment Insurance, and other parts of the social safety net — in order to support low taxes (especially for themselves). And they keep wages low via union-busting and a low minimum wage.

The “anti-establishment” working-class fears both free-trade and immigration (cheap labor). They want and need higher wages. And they depend upon Social Security, Medicare, Unemployment Insurance, and other parts of the social safety net.

The Republican establishment is delusional

The Republican establishment doesn’t want to believe that the party is splitting over fundamental differences.

They say the division isn’t about goals. It’s about being drawn to macho, dominating candidates. So if Rubio just acts like a bully, he will draw Trump voters.

So long as the Republican establishment continues to promote wealthy interests at the expense of middle-class and working-class voters, the party may not survive.