Robin Williams’ Depression. And Mine.

Robin Williams died about a year ago. As a tribute I am reposting a piece I wrote last year, in hopes that others might benefit from reading about my struggle with anxiety and depression. I’ve also learned a little more in the last few months.

Robin Williams’ death jarred me. And disturbed me. Reading about his struggle with depression and anxiety, his words kindled my own dark memories.

Unlike Robin, I’d found a way out.

Before he died, Robin Williams lived in constant fear. Sometimes he drank or took drugs to make it go away:

It’s just literally being afraid. And you think, oh, this will ease the fear. And it doesn’t.

But what did he fear?

As he described falling into that deep hole that showed no way out, I could relate.

In the summer before I began graduate school I began worrying about money — and probably other things I can no longer recall.

But at some point I began fearing fear, itself. I just didn’t realize that that’s what was happening.

I felt tremendous anxiety. And I started worrying that I would hurt myself, because I felt dark impulses to do that. Maybe others deal with this sort of thing by cutting?

For some reason I thought healing would come from focusing on the ominous force: exploring it, finding what lay at its base. Because then I could deal with the root problem. Right?

But I only fell deeper.

But in my first weeks of grad school I happened to read something that discussed what I was enduring — even though the reading was sociology and not psychology.

The text said that when people move into depression they often think that focusing on it will help them find the root problem to be overcome. But the focus just draws you in deeper. What you should do, instead, is focus on something else — preferably something happy.

From experience I could see that my focus had only drawn me deeper into a hole, and I was shocked to learn that I should ignore it, instead of try to understand it.

Luckily, UCLA was full of new experiences and fun distractions. And I saw that these drew me out.

And so I did two simple things. One was easy and one was not.

I realized that my taste in music was more introspective than cheerful, and I needed to get outside myself and into a more positive mood. So I bought some more upbeat tunes. And I watched funny movies. And I did fun things. And I simply chose to feel joyful. It sounds kind of silly, but it did help. That was the easy part.

It’s hard to know why disturbing feelings can feel so compelling, and yet they were. It took every bit of willpower I had to keep from being drawn back into them. But it helped to have something positive to be drawn to.

So for a while my life was battling the dark allure and choosing the light, instead.

I was fine by Halloween – and I tried helping another

And yet my transition was very quick. I was fine by Halloween. Here’s why I remember:

A guy I’d begun dating had been asked by his minister to help a young man in their congregation with a mental health issue. My boyfriend asked me to have a talk with him. (He’d thought I was studying psychology, not sociology — although my focus later became social psych.)

Not being a psychologist, I doubted I could help, but I said, “Sure.”

So the friend came over one evening and began talking about the constant fear that haunted him. As he spoke I saw his experience in my own.

I told him that I knew what to do because I had just gone through it, myself.

The young man was a Hollywood make up artist, and offered to give me an amazing makeover, in payment. But Halloween was coming and my roommate asked if he could do our make up for that, instead. I was annoyed — wanting to see how glamorous I could be. But not wanting to seem vain, I agreed.

I’m not sure how much I helped because I didn’t keep in contact. So I can only hope.

In the years since, I have met depression and anxiety again, but I’ve never been driven as deeply into it as I was that summer before grad school. Because now I know what to do. 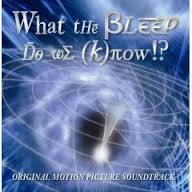 What the bleep do we know?

If you haven’t seen the movie, What the Bleep Do We Know? you might want to check it out.

The film shows how repetitive thoughts create strong neural connections in the brain. In the years before watching it, I was still stalked by shallow, but unrelenting, anxiety. I realized that I was just in the habit of feeling fearful, and had developed strong neural connections that needed to be weakened. Seeing that it was mere habit, I found it easy to say, “Well it’s dumb to be fearful over nothing, so stop doing it!” So that faded away, too.

I also learned about meditation which, with practice, helps you to let go of any thought you want.

Why was I able to find a way out when Robin, and others, don’t? I don’t know. Maybe finding a key to relief early on — within weeks of onset — helped. Perhaps the depth of my trauma was much more shallow. Others may need intensive therapy and medication. But maybe the things I learned could aid them, too.