← I Can’t Stop Staring At Other Women
My Mom v. Stanford →

Like most American boys, I grew up knowing dozens of terms that objectify women’s bodies and diminish women by reducing them to just a single part. It wasn’t until my 20s that someone taught me, and I started to understand, just how dehumanizing and common all this was. Jean Kilbourne’s Killing Us Softly videos have been particularly eye-opening.

Meanwhile, we do a very good job of dismissing relationships as unimportant in American culture, even though most guys value them very much. These expressions below need to go the way of the dodo. And yes, some of these could be applied directly to men by women or have easy parallels. Those expressions need to go away too.

Some of these are blatant, but some are more subtle like the notion that you can “steal someone’s girlfriend away from them.” Money, cell phones, and cattle can all be stolen because they can be legally owned. None of them, not even the cattle, have anything like human free will. But if you really believe that a guy’s girlfriend can be stolen, then you’re saying that she’s an object—property—and not a thinking human being who can make her own decisions.

Steal someone’s girlfriend: She’s an object without free will.
Do right things & she’ll be yours: There’s a formula that applies to all women because they’re all basically the same.

Win her heart: You win prizes, not people.
Trophy wife: She’s not a prize, she’s a person.
Take her off the market: She’s an object you can buy?
If you buy a woman a drink then she “owes” you some type of sexual favor. First, if you buy her a drink without her permission, she doesn’t owe you anything. That’s a gift and she is under no need to accept it or reciprocate. Second, if she agrees to let you buy her a drink, then she’s only agreeing to talk to you for the length of that drink; she is not agreeing to do whatever you want for the rest of the evening. Finally, if you think you’re being taken advantage of, then stop buying drinks for people.
Why buy the cow when you can get the milk for free: She’s not a cow. See “owes you some type of sexual favor” for the rest.
Kept woman: Paying someone’s rent, keeping them in fine clothes, and otherwise paying their expenses does not mean you control every aspect of someone’s life, including what they do with their genitalia.

Expressions that show disrespect for partner:

In theory, relationships are built on mutual respect and trust. Even in “traditional” relationships that Feminists disdain, there’s an assumption of separate spheres of expertise (paid work vs. childrearing). These expressions show no respect for a guy’s partner. 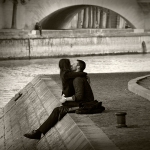 Harpy: Your girlfriend or wife is a mythical, filthy monster who lives for vengeance. Hmm, the living for vengeance sounds a lot like Elliot Rodger.
Bit on the side: She’s a person, not a “bit” which I’ve been told means “piece of a**” in this context. And I won’t bother to comment on the dishonesty inherent in having a second partner.
Make an honest woman out of her. Turns out honesty is based on sexual activity inside marriage and not the ability to keep one’s word. Who knew?
A lady on the streets but a freak in the sheets. Because double standards are so respectful.

Expressions that prioritize virginity. I have to admit that I’ve never understood the whole fascination of sex with a virgin. I wouldn’t want an inexperienced accountant or surgeon, so why would I want an inexperienced sexual partner? Whatever the deal is, these expressions say the only thing important about a woman is whether or not she’s had sex with someone before you.

Popping someone’s cherry. Do you really need someone with no experience so they’ll think you’re great in bed?
Sloppy seconds: Odds are anyone you have sex with who is 18 or older isn’t a virgin. Get used to it.
Leftovers (dating someone’s ex): See sloppy seconds.
When you get to heaven, you’ll be rewarded with virgins: Sexual slaves in heaven? Seriously? Doesn’t sound very heavenly for them.

If we start giving credence to the importance of relationships and stop belittling them, we might make our culture a nicer place.

This post originally appeared at The Good Men Project. It is lightly edited.

← I Can’t Stop Staring At Other Women
My Mom v. Stanford →