← Don’t Bully: The Kind Campaign
Repression: Not What You Think It Is →

Feminists Must Fight For Men’s Rights? 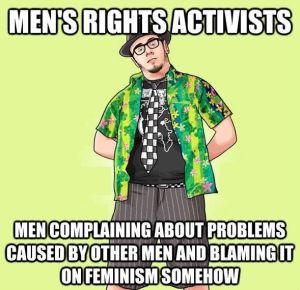 Men face sexism too. Who advocates for us?

Why aren’t you mentioning the fact that sexism against men gets ignored?

So I ask this:

Why do MRAs insist that women must fight for them when they feel no obligation to fight for women?

Because they never do.

If someone were writing a blog on racism, should a white person insist that racism against whites be addressed?

Should a blog focused on the poor take time out to look at difficulties facing the rich?

When men tell women to turn their attention away from women’s issues in order to address matters facing men, the complaint reflects male entitlement.

And the motive behind the complaint is revealed: Distract from working for equality.

My blog looks at the world from the perspective of the more powerless members of society: women, people of color, LGBTQ, and the poor, for instance.

Anyone who insists we turn the focus to the powerful is someone who seeks to keep power in the hands of the powerful.

Women are organized and men aren’t — now why is that?

So, feminists should fight for men’s rights because, “Women are organized and men aren’t.”

That tells you a lot right there. The reason men aren’t organized is because few feel they need to be.

After all, men still hold greater power: All US Presidents have been male, most of Congress is male, as are most business leaders, religious leaders, media owners/producers/writers. And when people hear “head of home,” they usually think, “male.” In fact, “female-headed home” means “no husband” to lead the family. Men are still more likely to be hired, promoted and paid more, on average. We are still more likely to say “he” than “she” when we talk about a generic person. “Man” still means everyone. Woman does not. And women are still too often blamed for abuse against them, whether battering or rape.

Solution: Stop seeing men as leaders. And stop ranking men above women, because that leads them to do risky things to prove they deserve the status of “man.”

The best way to determine custody is “best interest of the child.” Women tend to be given physical custody because they are more likely to sacrifice work for family, and so they end up with a closer bond to the child.

Solution: If women and men equally worked and parented then the best interest of the child would be physical custody by both parents.

Or, men could become stay-at-home dads. When they make the sacrifices and become closer to the child, the child’s life becomes less disrupted if dad gains custody.

MRAs complain that women tend to “marry up” — to marry men who outrank them in earnings and status. And they don’t like it because it leaves lower-earning men out of the marriage market.

Actually, in the US women and men typically marry someone of equal status.

But to the extent that women do “marry up” patriarchy is the culprit. And patriarchy also encourages men to “marry down.” So it goes both ways. Regardless, the couple is uncomfortable when a woman has higher status than the man in the relationship.

This piece was reposted by Feminspire.

← Don’t Bully: The Kind Campaign
Repression: Not What You Think It Is →