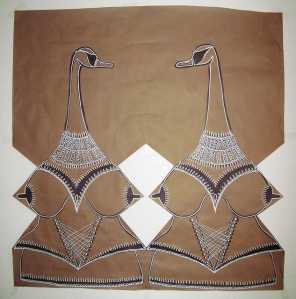 In honor of women’s history month I talked with Brock Neilson, a feminist artist who wonders if he might sometimes unconsciously support patriarchy.

Or, is he blasphemous instead?

BB: It’s very easy for anyone, including feminists, to unconsciously see and think in patriarchal ways, at least some of the time, since we’re all immersed in the system. You wonder if you sometimes unconsciously support patriarchy in your art. How so?

BN: This past year a lot of my art has been about someone – or something — that has enormous or strange looking breasts. These images are what I’d imagine a drunken fraternity or a 12-year-old boy drawing.

I imagine that these kinds of perversions are part of the package with which males are endowed in society, and I feel a responsibility to address that somehow. 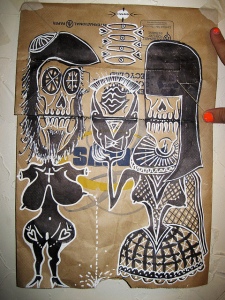 viewer to feel a kind of confusion about the body they are seeing. The breasts could also be more humane when they are not perfectly shaped or as easily sexualized, but I worry that I might be reinforcing patriarchy by not allowing something as commonly fetishized as breasts — or the person or entity to which the breasts belong — to just exist without having to be ugly, or strange, or beautiful, or symbolic. However, this concern is unavoidable as these images are being filtered through my nonobjective brain and hands.

The ultimate goal of feminism is to not have to be the mother, the champion goddess, the victim, or even a female or a male in order to have credibility and dignity. It is the hope that everyone could simply be who they want to be without having to force ourselves into degrading positions.

BB: How might your work be blasphemous instead, working against patriarchy?

BN: There’s been a big focus among popular male artists to make big objects and paintings that can be bought and sold — similar to a Wall Street investment. This approach to art is problematic. I have been decorating a lot of brown paper in my work because it’s cheap and accessible. Being a male who is involved in decorating materials that require a kind of gentleness can be a blasphemous act.

I remember overhearing a mother years ago who was telling her five year old son not to smell flowers because she was afraid that this would make him look “gay.” I was so taken back that this innocent behavior — a child smelling flowers — was already perceived as inferior. My work, however crude it may be, is concerned with a hope of reclaiming this kind of sensitivity.

Tawnie Silva, an artist I discovered this last summer, made a beautiful inflatable sculpture of a quirky four-eyed girl with a rainbow coming out of her head. It’s made of fragile plastic bags, but Tawnie Silva’s body is brawny and masculine. It is especially sacrilegious to commercial gender ideals when men make things that are sweet and delicate. Both women and men need to protect and make space for vulnerable things in others and in themselves. This is an important way that we can expand and break dangerous gender stereotypes.