← The Breast Fetish Distracts From Sex
My History Of Sex: Sacred… Scary… Fun →

Supporting the Elite Instead of Ourselves

They wanted someone in office who would fight for them, not the elite!

Yet the elite are still running things.

Take taxes. Most of us will get a tiny tax break but the rich get a huge tax cut…

…paid for with healthcare cuts to the rest of us. And hurting Trump voters most of all!

West Virginia had the highest support for DJT of any state, and 1/3 of West Virginians benefitted from the Medicaid expansion — which would be cut to pay for tax cuts for the rich.

Since Trump is bored by policy he probably offered Mike Pence the same deal made to John Kasich to entice him to the vice presidency:

Gov Pence, you will be in charge of domestic and foreign policy!

And what would Trump be doing? Why, making America great again. Doing rallies and symbolic gestures like saving a few jobs for workers here and there.

Pence was Charles Koch’s #1 choice for President in 2012. And Charles Koch is one of the wealthiest men in the world. He and his brother David have bought the Republican party and they seek to get rid of things like Social Security, Medicare, Medicaid, public education, the Child Tax Credit, the Earned Income Tax Credit…

The Kochtopus: Support the elite over yourselves

In fact, the Koch brothers have established a regular “Kochtopus” that richly supports candidates they like, threatens candidates they don’t like, and that supports think tanks that feed “news” to Rush Limbaugh and FOXNews, encouraging working people to support the elite instead of themselves. 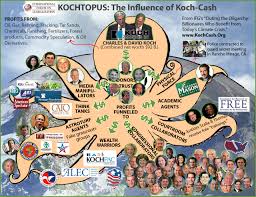 (E.g., they pay Rush Limbaugh’s syndicate $2 million to bash the Affordable Care Act and deny climate science… The Koch brothers make their money from oil. But we will suffer more — and harsher — hurricanes and tornadoes, coastal flooding, cold winters, hot summers, fires and drought in the West — for which we need to build dams and desalination plants or truck water in…)

Anyway, once Pence got on board the Kochs may have feigned lack of support for DJT — just to bolster working-class support for Trump — but David Koch was at the victory party in November.

Trump’s choices are the elite’s choices

As the transition started up you could see that Trump’s choices were Koch’s choices:

They got rid of the EPA, they’re trying to get rid of the Department of Energy and they deny climate science.

They also seek tax breaks for the rich paid for by cuts to Social Security, Medicare, Medicaid, public education, the Child Tax Credit, the Earned Income Tax Credit, and sundry other things that help working people.

And no Wall St regulations! Main Street will bail out Wall St again!

Ironic since the Kochtopus is actually why middle-class Republicans rebelled and voted Trump: The Republican party had stopped listening to their constituents.

Now Republicans are having a hard time passing legislation on healthcare and taxes because their constituents are at odds with the funders (Koch and Co.)

A lot still slips in. Here’s what has passed so far:

← The Breast Fetish Distracts From Sex
My History Of Sex: Sacred… Scary… Fun →