Women Are Incubators? Or Cattle? 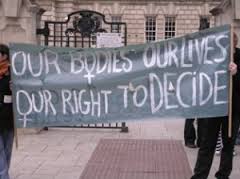 Our bodies — our right. Unless women don’t have bodies.

In non-patriarchal societies women are valued.

Not so much in patriarchies, where men rule and men are valued over women — whether you’re talking present-day America or the world circa B.C.E.

Oklahoma and Wyoming Republicans agree women aren’t people, disagree on just what they are.

So proclaims a Daily Kos piece written by Laura Clawson.

As evidence she points out that right now the Wyoming Senate is considering a couple of bills on women’s reproductive rights that are being handled by the agriculture committee.

Women’s health is being overseen by the agricultural committee? What are we, cattle???!!!!

But in Oklahoma women aren’t cattle so much as incubators.

I understand that they (women) feel like that is their body (but) what I call them is, is you’re a ‘host.’

Women think they have bodies but they really don’t? They are mere incubators that simply host other people — who do have actual bodies?

Rep. Henry makes this argument in his attempt to push legislation that seeks to give men more rights than women over potential abortions — even though women’s bodies are directly affected by pregnancy and men’s aren’t.

But then men are actual people, with actual bodies. So they deserve more rights than mere hosts do.

Oklahoma legislator has a body. But not a brain

This guy may have a body. But not a brain. As he continues with still more nonsense:

You (women) know when you enter into a relationship you’re going to be that host and so, you know, if you pre-know that then take all precautions and don’t get pregnant.

After you’re irresponsible then don’t claim, well, I can just go and do this with another body, when you’re the host and you invited that in.

But of course, right-wing extremists also fight against contraception.

Corporations are people. Women are not.

These same legislators claim that corporations are people. But women are not. I’ve written more about that here: Corporations Are People; Women Not So Much

Compare all this to women under patriarchy, historically.

Ancient Hebrews once saw men as the life givers. Women were demoted to mere incubators. Men produced the live seed which women simply held in their wombs.

That belief remained well into 18th-century Christianity under the concept of preformationism, which claimed that only men give life. Women are just nurturers.

Moving to Greece, once patriarchy took over mother-murder was deemed no crime. Because mothers aren’t actually related to their children. Only fathers are. Once again, mothers are simply incubators.

Whether we are talking ancient Greece, our early(ish) Judeo-Christian tradition, or modern-day Oklahoma and Wyoming, a lot of folks have fought — and keep right on fighting — against women’s rights and dignity.