← The Drip, Drip Toward Abuse
Women Are Incubators? Or Cattle? → 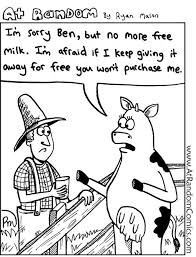 A male reader, I’ll call him Jed, wrote in with this warning:

There is a price to be paid when women have casual sex. It might be unfair. It might not be unfair. But there it is, be it biology, socialization, patriarchy…whatever… If women give sex away for free, men won’t marry them.

Why buy the cow when you can get the milk for free?

But sex and relationship are two different things. Even when a guy can get sex, most still want relationship. Even marriage.

“Meet the bachelors who are yearning for more” is a New York Times piece that surprised a lot of people when it came out. Men, it turns out, often want relationships. Even if they can get sex.

After a long day at work New Yorker, Jean-Marc Choffel, wonders, “Who do I call?”

Tonight I’m doing nothing. I could go out, grab a girl, have sex, have fun. But the sense of life is to have kids and try to give them as much as you know. I believe in the power of the universe. I believe (…in…) falling in love and having babies.

People think that if you are gay and you are single, particularly in the city, that there is this sort of unbridled freedom, that you’re at the gym, you’re at the office, you’re at happy hour, and it’s just a constant on-the-go lifestyle. That may be true for part of your life, in your 20s. Gender identities aside, as everyone gets older, your priorities change.

Andrew Smiler studies men and masculinity, and he discovered that – despite stereotypes – most men care deeply about love and relationships. In fact, he explained to the Good Men Project,

Nearly all guys have and want relationships, even the guys who screw around.

Regardless of their sexual history or interest in having random sex, when a guy has a sweetie, that relationship is important to him, even if he’s not very good at respecting it or making it work. Dudes like knowing they have someone to talk to, someone who will be there for them, and someone who will “have their back.” Men in long term marriages receive a slew of benefits from those relationships.

In fact, most guys are romantics, preferring long-term relationships over casual sex. Only about a quarter of men want to be in constant pursuit of sex with random women, he says.

And, most men marry — and are quicker than women to remarry after widowhood or divorce — even though they could just keep having casual sex.

Plus, when sociologist, Lisa Wade, asked college students about hookup culture she learned that 70% of women and 73% of men preferred sex in committed relationships.

Lucy Brown is a clinical professor of neurology at Albert Einstein College of Medicine. She studies brain activity of people in love. Her research leaves her believing that,

The drive to find a preferred mate is extremely powerful. It’s a reflexive urge, like hunger and thirst… romantic love can produce feelings of euphoria similar to the effects of cocaine or heroin…

And Justin Garcia, an evolutionary biologist at Binghamton University, says,

Having deep relationship with someone can be really magical and people all over the world experience that… (it) can really change someone’s life.

Now, marriage rates do seem to be declining. But there is no indication that this is simply because men don’t want to get married. The HuffingtonPost points out,

Some theories point to the economy (people feel they can’t afford to marry), some say that Millennials don’t feel the same societal pressure to marry as generations before them had. Others suggest that the younger generations simply doesn’t need marriage anymore, instead choosing to cohabitate and raise children outside the institution of marriage.

We can argue over whether casual sex or longer-term relationships are better. Or whether marriage is better than cohabitation. Those are questions for another time.

But luckily for Jed, he really needn’t worry so much.

← The Drip, Drip Toward Abuse
Women Are Incubators? Or Cattle? →