← Outside the Sex-Negative Box
What Created Patriarchy? Many Possibilities →

All huge, passionate crowds of people who SHARE this goal:

We ALL want our government to work for working people.

Yet cultural issues divide and conquer us.

Trump voters desperately want good-paying jobs. And they want government to work for us instead of just the moneyed elite.

Progressives want the exact same thing. But without the xenophobia that creeps up among some Trump voters. (Most people who voted for DJT aren’t sexist and racist, I’m sure.)

Did I say that cultural issues divide and conquer us?

If the moneyed elite want government to work for them, but they are not the majority of Americans — being elite and all — whatever can they do?

Why, they can use cultural issues to make us hate each other.

The selfish sector of the moneyed elite push government to rip up banking protections (aka Wall Street regulations). And then ordinary people are hurt by the financial crisis that ensues.

If our new banking protections are trashed once again (looks likely) the 2008 crash will be only the beginning.

But who gets blamed?

Meanwhile, “lazy black and brown people” are also accused of stealing hard-working (white) people’s money via welfare. Even though whites are the biggest group on the welfare rolls. And even though black women have a very high rate of workplace participation. (Due to racial discrimination black women have historically needed to work to make ends meet.)

Plus, public assistance is humiliating.

Or, women are blamed for taking “men’s jobs.” Because apparently a man has more right to a job than a woman does.

And of course, a lot of folks are mad at Mexicans and the Chinese.

Redistribution of wealth from the middle-class to the rich

It might seem like women and minorities or foreigners are taking your jobs. But really, the notion is used to distract you from the source of your real problem.

And to divide and conquer working people.

What’s actually happening is a huge redistribution of wealth from the middle-class to the rich.

Over the last 40 years almost all of our economic gains went to the top 1%, thanks to automation.

But we don’t blame them. We blame one another.

Why fight each other? We will all be overtaken by bots

I’m all for fair trade deals. But why fight each other when eventually we will all be taken over by bots?

Even if Trump keeps jobs in America, most work today is lost to automation. And it won’t be long before technology takes over most of our work.

Once the bots take over we will really need the government to help figure out how ordinary Americans can do productive work and get paid, whether through retraining, aiding entrepreneurs with college courses and healthcare for all, or supporting the arts, for instance.

If government doesn’t facilitate the move to technology then even the moneyed elite will be hurting when their sales and profits evaporate. (Who can buy anything when “no jobs” means “no money”?) 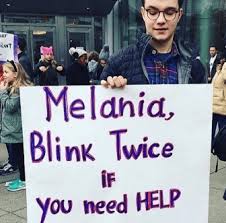 Ok, I’m using signs from the Women’s March – but they were funnier!

And can you imagine the political carnage from frustrated Americans who can’t survive?

Well, maybe we can fight automation. But every country would also need to do that, otherwise American companies will go under. Plus, giving over menial jobs to technology could free us to live interesting and productive lives in new ways.

The “Crips” States versus the “Bloods” States

With our cultural divide Americans are growing tribal. Kind of like the Sunni and the  Shia. Or the Bloods and the Crips.

And it’s potentially just as self-destructive.

I comment on the the wall of a “red” Facebook friend and get hate (usually from my red friend’s red friend). And from people who won’t even read what I wrote! And even though I want her to get a good paying job just as much as she does.

Or, my blue friends don’t want to unite with red people where we have common ground because they feel alienated by the racism and sexism.

And so we talk past each other.

We must start having conversations and begin to see what we have in common. And unite for the greater good.

As I watched joyful Trump voters at the Inauguration, or as I marched with other fearful but determined women and men, a Buffalo Springfield song kept running through my head:

I wasn’t the only one. Check this out. Women’s March vis-a-vis Trump inauguration. Set to Buffalo Springfield’s “For What It’s Worth.”

Morning Joe For What It’s Worth

Posted on January 25, 2017, in politics/class inequality and tagged Divide and conquer the working class, Morning Joe For What It's Worth, Red states and Blue states, Redistribution of wealth from the middle-class to the rich, The Women's March, Trump inauguration, What Women's Marchers and Trump Supporters Agree On. Bookmark the permalink. 42 Comments.

← Outside the Sex-Negative Box
What Created Patriarchy? Many Possibilities →