← Laws “Protecting Women” Harm Them, Instead
Why You Should Cuddle →

“Blinded” introduces us to a racially ambiguous “everywoman” who seems content.

But something’s not right.

She’s supported by a pink-tinged desert-scape. It’s beautiful. But dry. And half empty.

Beyond is the universe. Everything is available.

But our everywoman is blinded by the pink bar that keeps her from seeing her potential.

And we are blocked from seeing her eyes — the window to the soul.

We are all blocked by feminine expectations.

This piece by Ashton EB Cutright-Bray is part of the 2015 anthology, Les Femmes Folles: The Women, edited by artist, Sally Deskins.

This beautiful collection brings together feminist artwork that sparks thought, inspiration and conversation.

It’s hard to choose which pieces to talk about, but at a time when climate change threatens, thanks to our dominating-instead-of-harmonizing relationship with Earth — a conflict we are sure to lose — I was struck by an earth-inspired piece.

Walking through the park’s woods I realized that I had stumbled upon something very interesting. What I found there was acre upon acre of trees with history spelled all over them. Almost every tree had been marked by someone who had strolled through. There were hearts with initials and names carved into them, some with the year dating back to the 1930’s… I found the faceless initials carved into the trees and what might be the story behind them to be most interesting.

Viewing this artwork I see earth animated by humans drawing themselves on Gaia, the earth goddess. My own initials are upfront… along with (Black) “Sabbath” and other Rock Gods.

But awkwardly. Is this worship? Or a scar? 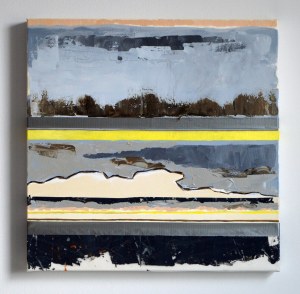 Which brings me to “Changing Landscapes,” By Hillary Leach, who draws inspiration from nature, discord and harmony:

I’m interested in the idea of opposing forces, and I consider the canvas to be a place for mediation between the two. Harmony versus discord, the organic versus the contrived, perfection versus imperfection.  These are the forces that I seek to find equilibrium between in each of my paintings. I approach them as puzzles to be solved.

I play with each of those opposing forces until the work feels balanced.

She uses unconventional and oddly matched materials to highlight conflict and resolution.

In “Changing Landscapes” I see contrasting colors and emotions, a lot of layers and a lot of depth.

Without life’s contrasts and contradictions, ups and downs, we’d be left with a whole lot of nothing.

You can order Les Femmes Folles: The Women here.

← Laws “Protecting Women” Harm Them, Instead
Why You Should Cuddle →